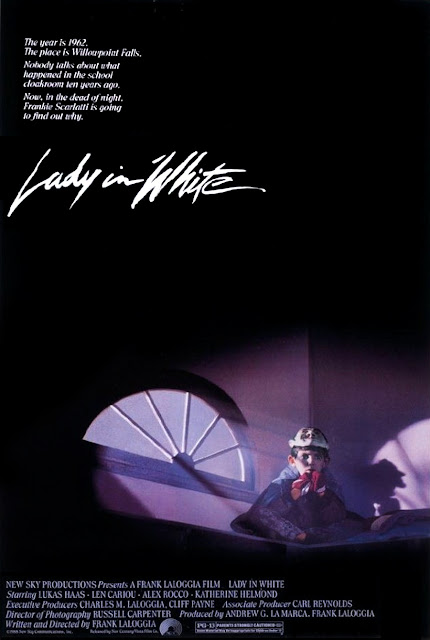 Hello and a happy post-Halloween to you all! Just a few days ago, and for the very first time, I watched a movie I’ve been aware of for years and years, something I saw on the shelves of the video store I worked at and the ones I patronized! I never did pick it up, because although it was a spooky picture and I like those, it seemed a bit too much like a kiddieshow! Ha ha, it was the same with The Monster Squad! But having a kid myself now, who's the same age as this film's protagonist as it happens, it seemed the perfect time to finally sit back and take in The Lady in White!

The opportunity to see the picture came from the director himself, Frank LaLoggia, who posted a link to his director’s cut on a social media! I downloaded it toot sweet and watched it with my family, it being a family-type movie more or less! It’s a flashback sort of a story, a childhood memory caper like Stand By Me, and so it’s appropriate that it begins in the present day with the main character as an adult, a Stephen King-type horror writer played by LaLoggia himself, being ferried to his old stomping grounds by a cab driver played by Bruce Kirby from, yes, Stand By Me! Ha ha!

The young version of this character, Frankie Scarlatti, is played by Lukas Haas from Witness, Mars Attacks! and Who Loves the Sun! He dwells in a small upstate-New York town with his dad, Alex Rocco from Gotcha, Stick, and Herbie Goes Bananas, his brother Geno, played by the talented Jason Presson from Explorers, and his old country bickerson grandparents! Life is good for jug-eared Frankie except for the fact that his mom has recently died, and he must occasionally suffer some older-brother ribbing from Geno!

Also there’s a pair of mean kids in his classroom, and one evening close to Halloween they lock him in the cloakroom at his school! There he sees the ghost of a little girl who was murdered a decade earlier, and then a rather more substantial presence: a man with a hooded face who comes into the cloakroom to find something, and, realizing he's not alone, starts to strangle poor Frankie! Yes, it seems the town has been suffering a series of child murders, and Frankie, having survived his encounter, realizes he’s got access to clues that might help him find the killer, and that another ghost, the legendary Lady in White, might be a further key to the mystery!

But he only comes upon these realizations gradually, for Frankie is no precocious boy detective but a refreshingly real kid who gets scared and doesn’t always do the right thing! And the movie itself is not a fast-paced, Goonies-style kids’ adventure, but a more meditative memory piece that moves at its own tempo, bringing on characters like a family friend played by Len Cariou from One Man, The Four Seasons, and Executive Decision; the local crazylady, Katherine Helmond from Time Bandits and Brazil; a storytelling postie well played by Sydney Lassick from Alligator and Silent Madness; and Lucy Lee Flippen from Summer School as Frankie’s teacher! And then of course there’s the poor school janitor, blamed for the killings mostly because he’s black; and his poor wife, left alone with her children to suffer the wrath and scorn of the town; and the grief-stricken racist lady, mother to one of the dead children, who gets a mad look in her eye and plots revenge against the wrongly-accused janitor!

Between the child murders and the racism it gets kind of murky for a family film, but some tonal equilibrium is maintained thanks to the heavy filter of nostalgia, the antics of the grandparents, and, since the story unfolds over a period of months, the inclusion of both Halloween and Christmas scenes! The narration, delivered by LaLoggia, is pretty ropey and is probably best ignored, which the poor sound mix on the director’s cut I watched made easy to do; and some of the optical trick effects are silly in both conception and execution! Also, at 122 minutes, the movie, or at least the director’s cut, might be a tad overlong, ha ha! The cliffside climax does tend to linger like the last guest at a Halloween party!

But it all comes straight from the heart, and that’s a virtue not to be airily discounted! LaLoggia took his own history - that of a horror-loving kid named Frank growing up in an Italian family in upstate New York - and married it to an established local lady-in-white legend and an invented serial killer story, and the result is a heartfelt if minor spookshow! I should also mention Rocco, who so often played a hard case but here is warm and kind as the anti-racist father! It was nice to finally catch up with this little movie, and I give Lady in White two and a half squirrel hunting jackets!