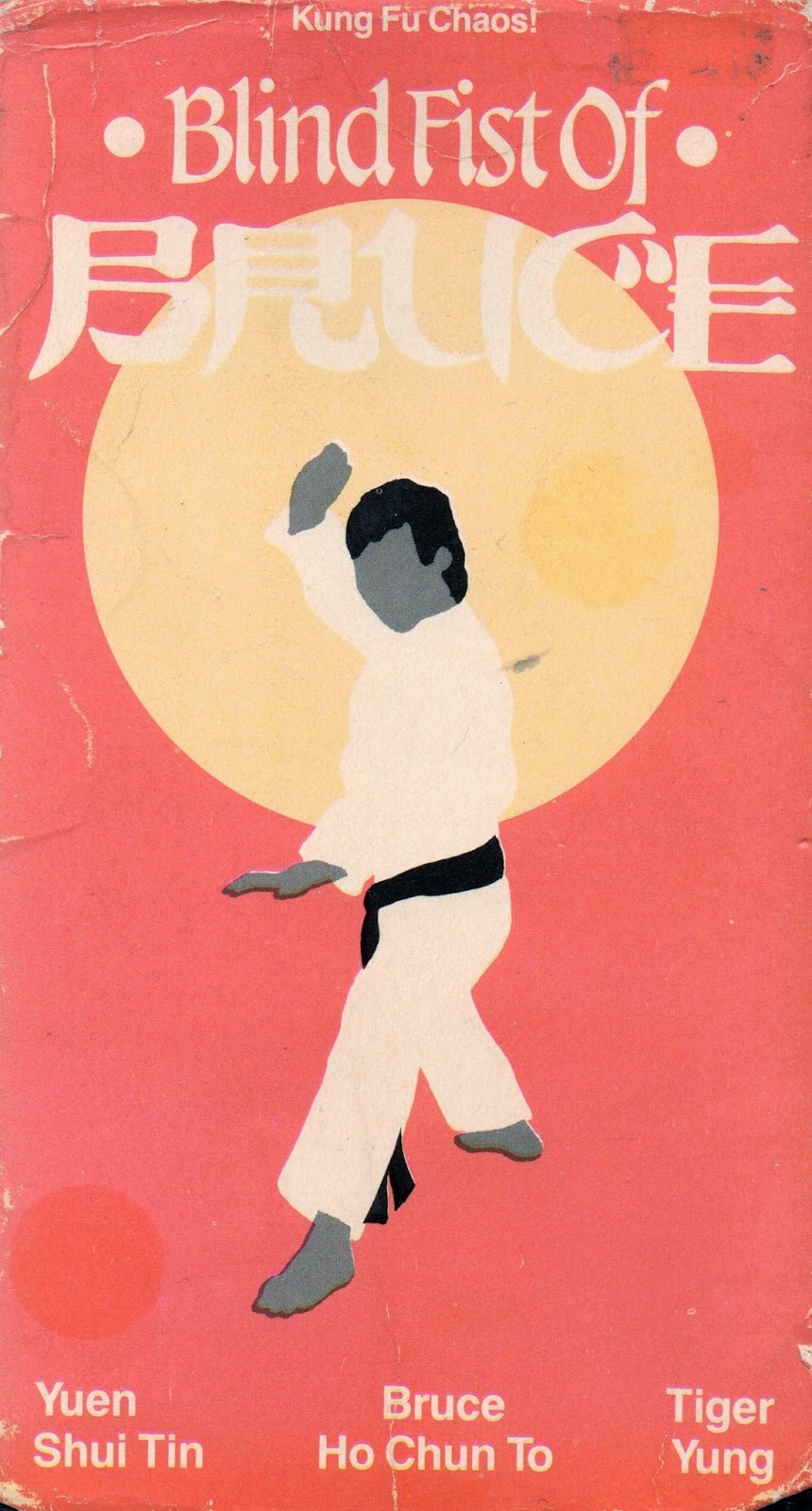 Ha-ya ha-ya, it’s Bruce! I mean of course that it’s me, Burl, ha ha! Yes, I’m here to review a kung-fu picture for you! It’s Blind Fist of Bruce, one of the many examples of Bruceploitation, in which guys named Bruce (Bruce Li in this case) do some fights and jumps and battle grunts just like, but not as compellingly or personably as, the original Dragon!
I’m not an expert on the martial arts pictures, that’s for sure, so you’ll have to bear with me a bit here! I know enough to be familiar with this particular plot, though; namely that it begins with a wealthy, callow and, let’s be frank here, kind of dumb young man who runs a bank and fancies himself its great protector due to his stunning martial arts skills!
But his skills are illusory, as all his moves have been taught to him by a pair of obvious conmen who make up kung-fu styles on the spot based on whatever animals happen to be passing by! This young numbskull is silly enough to swallow it, and the conmen bolster his fantasy with the occasional staged robbery attempt, which the banker apparently foils!
Soon enough a genuine gang of toughs descend upon the town and the banker’s self-deception is obliterated! He gets repeatedly beaten, and all his worldly possessions are claimed by the gang! He finally sees the light with respect to the conmen, and they quickly join the gang themselves!
The devastated banker finds refuge with a local busker, an elderly blind man who would cause the Beatles great shame if they ever saw him, for he is the true mop-top! It does genuinely appear that he has taken the handle off a mop and simply placed the bushy part on his head, ha ha!
Eventually this crusty old blind man is revealed as a master kung-fu artist, and he teaches the banker enough that he is able to, ha ha, mop the floor with his enemies! But they call in a ringer: the giant bad-ass known as Tiger, who used to be a student of the old blind busker, and in fact is responsible for blinding him in the first place! So now it’s time for an epic battle and a sudden ending!
Ha ha, I’m not sure how this stacks up against others of its type, but I found the crude character arc and the balletic athleticism of the fight sequences fairly entertaining! The goofball humour of the early scenes was painless enough, I suppose, and the dubbing added some extra, more genuine laughs! Unfortunately the copy I watched was full-screen, so very often I was watching an area of empty space with fists and feet flying into it from the edges!
It’s not a standout effort, but it had a certain momentum, and of course you want to see the good guy learn his skills and see the bad guys pay for their misdeeds! It’s always nice to see their reactions when they realize this fellow can actually do some damage! Ha ha, I’m going to give The Blind Fist of Bruce two martial arts pushcarts!
Posted by Burl at 13:35