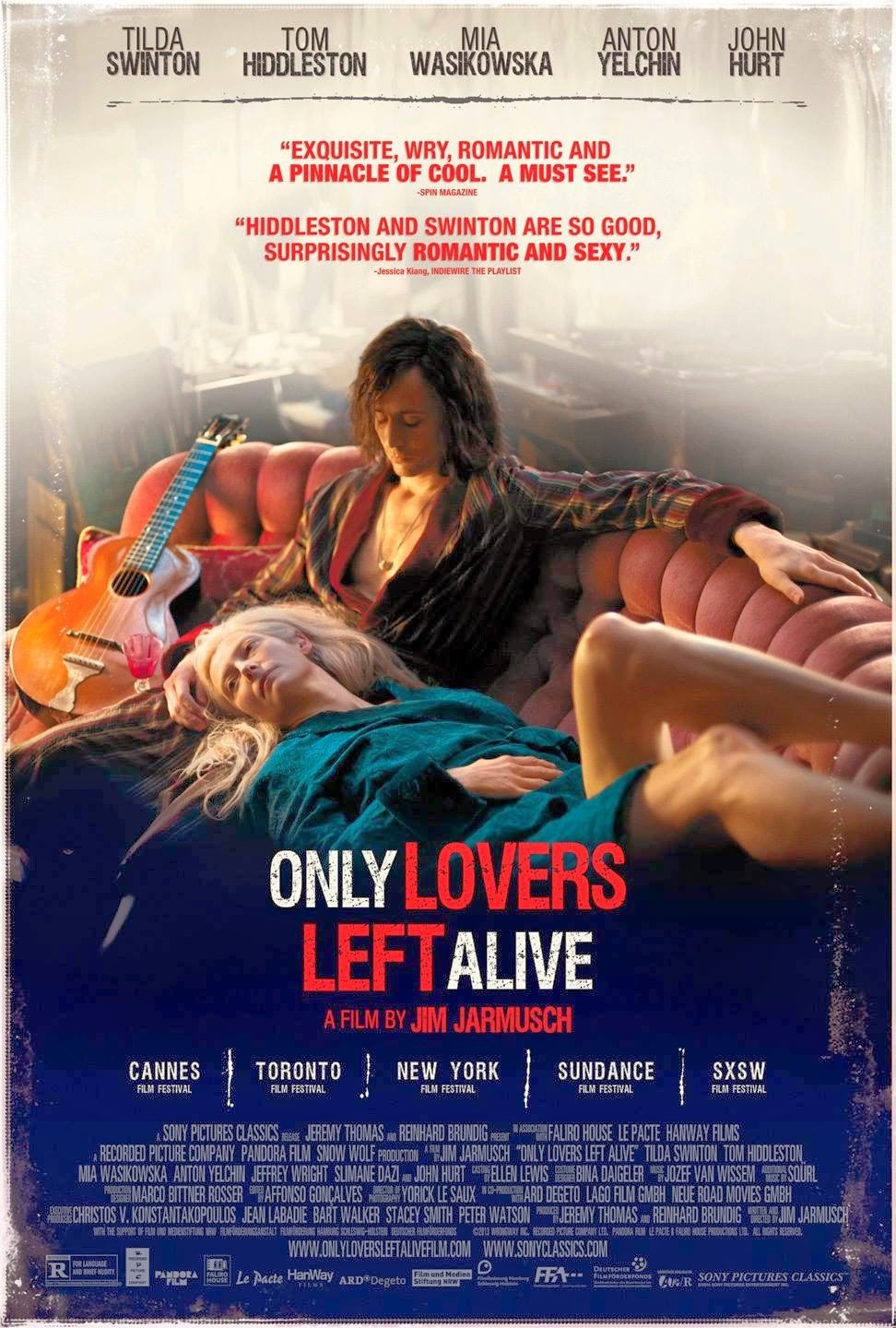 Bluh bluh, it’s Burl, here to review a vampire picture for you! But yes, you’re right, it’s not quite the usual vampire picture, but a vampire picture made by Jim Jarmusch! And if you’re now making the assumption that the vampires in Only Lovers Left Alive are louche, international sophisticates who consume culture as hungrily as they do blood, you’d be entirely correct! Ha ha!
I have a long and fulsome relationship with Jarmusch films! For example, I saw Mystery Train at a premiere festival screening – the North American if not the world premiere, in fact – and at the end of it, after Jarmusch did a little Q&A, they rolled a piano out onto the stage and Screamin’ jay Hawkins ran out and jumped on top of it, pounding on the keyboard upside down and shooting fireballs from his fingertips! Ha ha, it was great! Another time I saw Year of the Horse at a midnight screening where Jim and, of all people, Henry Silva came out and did a marvelous talk! I’ve seen as many as possible in the movie theatre: Stranger Than Paradise, Dead Man, Ghost Dog and so forth! In short, I’m a fan!
And so along came Only Lovers Left Alive, and it did not disappoint! The picture stars Tilda Swinton, who has of late been populating Wes Anderson films like Moonrise Kingdom and The Grand Budapest Hotel, and Tom Hiddleston, of The Avengers and Midnight in Paris fame, as two vampires named Adam and Eve, married but living apart, and still very much in love! They don’t put a biting on people, but get their blood from hospitals, and each of them have spent centuries reading, listening to music, learning about science and so forth! The only area of interest they don’t pursue is history, since, ha ha, they’ve lived it!
Eve dwells in Tangiers and hangs out with aging grampire Christopher Marlowe, who really did write Shakespeare’s plays and who is portrayed by that aging old grampire John Hurt! Adam, on the other hand, is a mopey postrocker living in the wildernesses of Detroit; his Renfield is an eager-to-please longhair named Ian, played by Anton Yelschin from Fright Night and Star Trek Into Darkness! We get a sense of their lifestyles and the things they enjoy doing, and after a while Eve journeys to Detroit to visit her hubby! (She books nighttime flights to get there, and the movie ignores the fact that there’s no such thing as a transatlantic flight which takes place entirely at night! But never mind!)
Soon, as foretold by dreams, Eve’s sister-buddy arrives to shake things up! Ha ha, she’s played by Mia “Stoker” Wasikowska like a vampire version of Ian Holm’s daughter from The Sweet Hereafter! A crisis point is arrived at and the two hemogobblers recuse themselves to Tangiers, where more problems await!
But you can forget about all the character and plot stuff I just told you, because really this movie is about what Jim Jarmusch would do if he was a vampire, and more particularly a movie about appreciating cool stuff! They’re really just a pair of superfans, immortal observers of the great cultural tapestry mankind is weaving just (it seems) for them, and which they embellish regularly themselves!
Some of the dialogue and the stuff struck me as rather obvious or hamhanded; but many other times I was pleasantly struck by a flourish or an idea! There’s a marvelous scene in a movie palace that felt almost like a centerpiece or Holy Motors-style entr’acte! The punchline to this scene made me actually wince, for I saw the movie in a cavernous theatre which is, in a few days’ time at this writing, due to close its doors forever! I have a real history with this particular downtown threeplex – a movie of my own premiered there, after all – and will miss it most heartily!
I enjoyed this vampire picture, so different from and yet so indebted to the Hammer vampire pictures of yore! I’ll give Only Lovers Left Alive three faces melting in acid!
Posted by Burl at 23:00