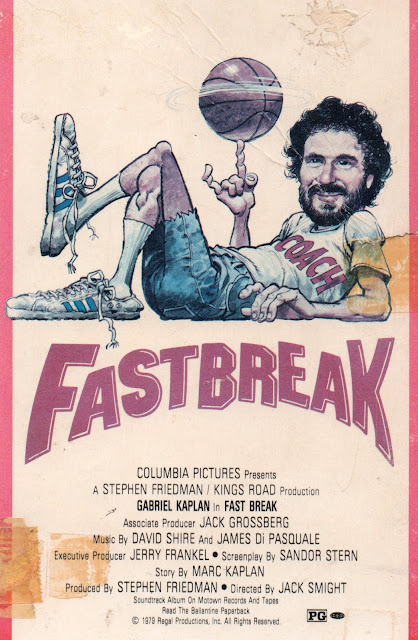 Burl here again! It’s time for me to review a sports picture for you, I think! It’s not my very favourite genre out there, but there are some good ones for sure! I think if I had to choose the one I like best, it would be Slap Shot! Ha ha, what a great movie! And The Bad News Bears is a pretty good one too, don’t forget!
Fastbreak, which I’ll review for you today, is no Slap Shot! It’s not even a hockey movie in fact, but a basketball picture! Basketball is a game I appreciate more than actually like – for example, I can really get behind the idea that, unlike other sports, in basketball possession of the ball is a bad thing unless you do something with it right away; and that, in direct opposition to football, a lummox’s sport, territoriality on the court is a non-issue, and basketball’s model is what writer Dave Hickey calls “the polyglot choreography of urban sidewalks” rather than the bullish clashing of armies at war!
And I guess Mr. Kotter feels the same way! He – or perhaps I should say Gabe Kaplan – plays a New York deli counterman who loves basketball even more than pastrami, and his fondest dream is to one day coach a college team of his own! Well, when pokey little Cadwallader University of Nevada comes calling, he gets his chance! But his wife doesn’t want to leave the Big Apple, so he packs up his things, says goodbye, shanghais a quartet of ringers and drives his station wagon to Nevada!
The university campus is no stately, ivied institution of learning, but rather looks like the set of Hogan’s Heroes after a decade of abandonment! Kotter’s ringers are a bit disappointed! This group of youths is the real core of the movie, Kotter excepted, and they each have their own conflicts with which to deal as the season progresses! Preacher is being stalked by the homicidal father of a fifteen year-old girl he seduced; D.C. (played by Harold Sylvester from Innerspace) is dealing with rage issues and a fear of becoming homosexual, and is wanted by police; Hustler is – well, Hustler doesn’t have much of a story, actually; and Swish, whom the rest of the players take to be a simple homosexual, is actually a girl in disguise!
Mr. Kotter is doing his best to coach the team, and the movie presents him as a very good coach indeed, except when he acts like kind of a jerk! It eventually comes down to the Big Game, which is to be played against Nevada State, coached by the fearsome Bert “Lies” Remsen! Ha ha, I won’t spoil things by telling you who wins, but I’d be lying if I said it was Nevada State!
The plain fact is that I enjoyed watching this picture, but it’s hard to say exactly why! Lately I’ve been slightly fixated on comedy/dramas from the years 1979-80, because of some undefinable flavour they have! There’s an appealing grottiness to them, maybe! Also they’re not all that funny, and, strange as it sounds, that’s a quality I like in a comedy! At times the movie strains to be Welcome Back Kotter with four Freddie “Boom Boom” Washingtons instead of the usual Sweathogs, but mostly it sits in some strange limbo between comedy and pathos, with each quality cancelling out the other and leaving nothing in particular but Mr. Kotter’s rosy, bearded lips! These are lovingly filmed by the director, Jack “Damnation Alley” Smight!
I liked Kotter’s performance though, and the basketball players were all good, even though they weren’t all professional actors, and Bert Remsen is always fine, and there’s even an appearance from Yor, Hunter From the Future himself, Reb Brown! I give Fastbreak two and a half enormous bags of pot!
Posted by Burl at 14:08