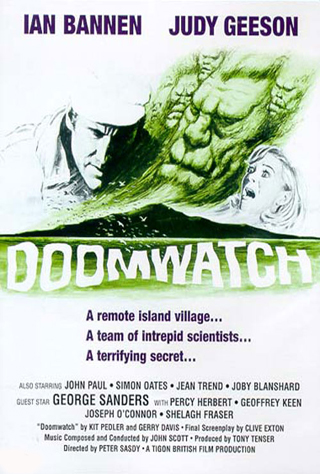 From a remote island it’s Burl, here to review an early-70s movie about a mainlander travelling in his official capacity to a small, hermetic island off the UK coast in order to solve a mystery involving (among other things) a missing girl, and met by what appears to be a conspiracy among the unsociable residents of that island! Ha ha, no, it’s not The Wicker Man I’m talking about today, but Doomwatch!
Within the world of the movie, “Doomwatch” is the name of an organization mandated to keep tabs on any globe-threatening environmental outrages, and their adventures were chronicled in a BBC television series of that same handle; this movie was their first and only leap to the big screen! I’ve never seen the show, so I’m not sure how run-of-the-mill the situation here is, but if it’s typical then I guess it was an environmentally conscious X Files type of thing!
Ian Bannen from Gorky Park and Ghost Dad plays an investigator sent to Balfe, which I initially heard as “Barf,” and which turned out to be an island off the Cornish coast populated exclusively by the world’s most unfriendliest people! Judy Geeson, who later went bonkus in Horror Planet, lurks in the background as one of the island’s friendlier faces, a schoolteacher of relatively recent arrival! Bannen is there to test the local waters and wildlife for long-term effects from an oil spill, but discovers something else going on: almost everybody on the island is slowly turning into Rondo Hatton! They’re also getting violent, a la Impulse, and all this acromania is because of something in the fish!
Initial suspicion falls upon the Navy, who keep a cordoned-off area nearby and seem lately to have been dumping stuff! Ha ha, but Admiral George Stevens, the celebrated actor known for his role in Endless Night, assures Bannen that it’s nothing to be worried about, just barrels of nuclear waste, perfectly harmless! The wry baritone of Stevens’ great voice is persuasive, so Bannen searches for another culprit, which he eventually finds! Meanwhile he’s forced to spiral his own James Mason-like voice up into increasingly higher registers by way of pleading with the recalcitrant islanders to let him help them! Ha ha, after some close calls with a gang of the resident acromaniacs, there’s a very bittersweet ending indeed!
I do like the “small town of weirdos” situation, and like it better still when it involves a remote, rocky island! So the picture had that going for it! Unfortunately I went into my viewing of the film expecting that movie about the turtle monsters who suck out people’s bones! You know the one, Island of Terror! Anyway, once I realized no bone-sucking turtle monsters were forthcoming, I was pretty bummed and didn’t enjoy the picture as much as I might have! That’s not the fault of Doomwatch of course, but, ha ha, what can you do! Anyway, Doomwatch is intelligently done and has its heart in the right place, but it also could have used a bit more pep and a dollop of style! Still, I’m going to give it two sloped brows and eventually forgive it for not being Island of Terror! Ha ha!
Posted by Burl at 22:39