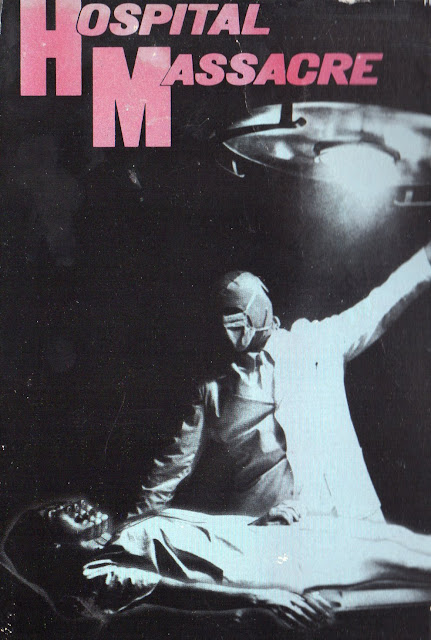 Out of the corner of your eye, a flash of movement – and then suddenly by your side it’s Burl! Ha ha, I’m here to review another slasher picture for you, Hospital Massacre!
Back in 1981 there were a couple of hospital slasher movies released, Visiting Hours and Halloween II, and also a notable Valentine’s Day slasher, the renowned My Bloody Valentine! And then, as though trying to trump them all in a single stroke, along came a hospital slasher on a Valentine’s Day theme, Hospital Massacre! I’ll give you a quick sketch of where this one sits in the classification system: it’s a semi-mystery maniac picture with a touch of the Past History bit and a few splashes of actual Makeup Effects here and there! (There isn’t a credit for Special Makeup Effects per se, it should be noted, but a quick eye may spot a credit for “Makeup Master” in the closing crawl! The name beside it is Allan Apone, who also did some of the trick effects for Silent Madness and The Sword and the Sorcerer!)
Ha ha, the mayhem in this one starts on Valentine’s Day 1961 at Susan’s house! Harold, an awkward boy, loves Susan and leaves a card stating as much! But she and her little buddy laugh and stomp on the card, and this makes Harold so mad he goes instantly and untreatably insane, and hangs the little buddy from a coat hook! Ha ha, that’s the motive? Class Reunion had a more reality-based kickoff to murder than this one!
Well, almost twenty years later, Susan is going to the hospital to get the results of her tests! Wouldn’t you know it, Harold is there, wearing a surgical mask and breathing heavily! He does a little subterfuge with Susan’s X-rays, making it seem like she’s got a bellyful of worms! You’d think worms would be pretty easy to test for by simple use of the stethoscope or maybe a poo sample, but this hospital is not exactly the Mayo Clinic!
So for the whole middle part of the picture, the horror comes not from Harold’s slicing and dicing, but from Susan’s tribulations with the hospital staff! She’s also cursed with the dumbest, most ineffectual boyfriend ever! If two lady nurses, even tall ones, tried to bundle my girlfriend off down the hall as she screamed “Let go of me!,” I like to think I’d help her out! Ha ha, this guy sort of deserved to get his head cut off with a bone saw, I think, and that’s exactly what happens to him!
This is not a particularly gory picture, just to let you know! There are Special Makeup Effects, as I’ve mentioned, but they’re fairly minimal! A guy gets an acid facewash and ends up with a visage of foam! A snooty doctor gets a chop to the head and another is poked through the throat! There’s a hypodermic needle murder, which I suppose has to happen in every medical horror movie, although they always manage to simultaneously disgust and bore me somehow! Most of the killings are pretty dry, it has to be said!
More notable are the touches of weirdness with which the movie is graced, and I suppose that since this comes from the director of Hot Bubblegum and The Last American Virgin, bizarre flourishes such as the room full of squirmy bandage patients, the troika of witchy old ladies, or the scene with Harold holding up a bedsheet as he runs down the hall, are to be expected!
Well, it’s a little dry, a little boring in spots, a little sleazy here and there with the breast exams and so forth, a bit silly and a bit stupid, but Harold gets as good as he gives in the end (stabbed, splashed with flammable liquid, bopped several times with a metal pipe, lit on fire and sent over the edge of a building to plummet screaming ten stories to his death), so I give Hospital Massacre one and a half weirdo fumigators, half as many as are in the film itself! Ha ha!
Posted by Burl at 20:09