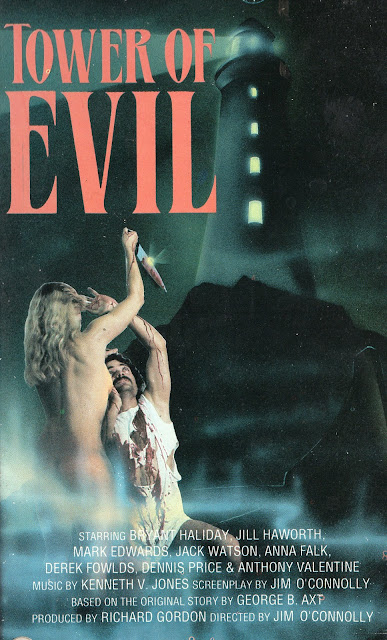 Ha ha! You know who it is? Burl! Yes, I’m here to review another picture for you, this one straight from the foggy shores of Blighty: one of those early-70s British pictures I was talking about in the review of Scream… and Die! It’s Tower of Evil, also known as Horror on Snape Island, and I think it’s got some other titles too! But let’s keep things simple and call it Tower of Evil!
This movie doesn’t get the recognition that it—well, I don’t want to say deserves, but that I’d expect it to have! I suppose it’s an older movie, and the mayhem and nudity are all wrapped up together in one crazy few moments of motion picture rather than being spread out to make a more memorable moviegoing experience overall!
Some fishermen arrive on foggy Snape Island, a bleak and inhospitable promontory, honeycombed with caves, upon which perches a decrepit lighthouse and be-rubbled house! Well, they start finding corpses, and the next thing you know a naked lady runs screaming at them, managing to give one of them a pretty thorough poking before catching a bop on the head from the other!
Because one of the murder weapons was an ancient Phonecian spear, some artifact historians become involved and head to the island to see what’s up! In the meantime, the naked lady has been given some clothes and is being hypnotized by a nine-light covered with multicoloured gels! The idea is to lift her out of her funk so she can explain what happened on the island!
Flashbacks to these events, which involve a bunch of British youths trying to sound American, are salted in as we follow the relic hunters to the baneful islet! The surviving fisherman, a mysterious detective and a dimwitted treasure-hunting tightpants are along for the ride! Altogether they make up as petty and nasty a bunch as you could ever hope to find, and all of them dumber than a box of dead crabs in the bargain! It quickly becomes clear even to this unleavened group that they’re not alone on old Snape Island, and soon there are corpses a-plenty littering the rocky ground! Heads and hands are cut off, faces chopped and torsos poked, and screaming victims plummet from the top of the lighthouse!
The thing about this particular group of people, and the real downside to this picture, is that they’re ready-made victims who may as well have been groomed in some behavioralist’s operant chamber to act in just exactly the way that would best guarantee a domino-like mass demise! They’ll wander off alone for no reason at all, ignore obvious danger signs, and disrobe for sexual intercourse in the middle of a desperate fight for survival! Ha ha, they’re a bunch of dim quilvontics, and no mistake! 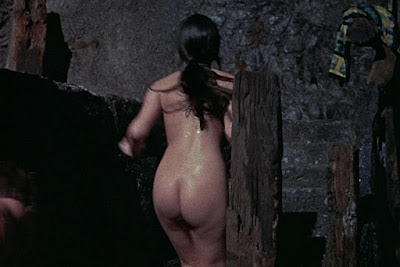 There’s one scene that stands out for sheer stupid behaviour! Someone hears a scary noise, and the men of the group go out to investigate! “Ha ha, stay right here,” one guy tells the ladies! Of course while the fellows are out, one of the ladies gets the chop! Instead of offering abject apologies, the guy is all like, well, nothing we could have done to prevent that! And later, when another scary noise is heard, the remaining lady says “Ha ha, you’re not going to leave me alone again!” The guy responds in a tone suggesting she’s a child who’s just asked the stupidest question in the world: “Of course not! Get your coat!” Sorry buddy, but you’re the idiot here!
It’s pretty enervating! But the rest of the movie is fairly enjoyable! You might be wondering who’s doing all the killing? Well, usually in movies like this – Raw Meat, for example – the killer turns out to be a disheveled, giggling madman with a big shaggy beard, and that’s the case here! He’s got some pretty spooky scenes, I can tell you! I give Tower of Evil two and a half model lighthouses!
Posted by Burl at 10:35