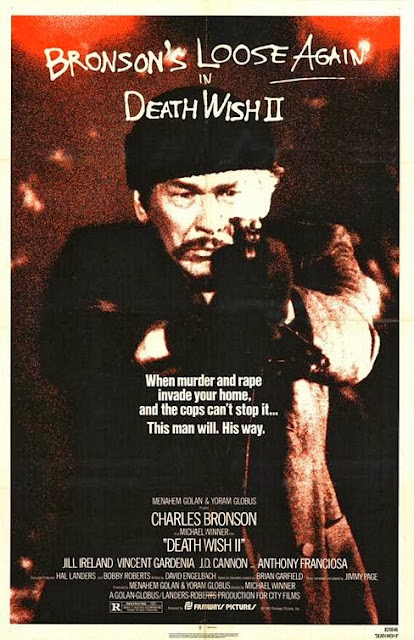 Hi, Burl here, just looking for the ol’ wet-dry vac! Ha ha, actually I’m here to review a picture for you, and this time it’s one of those Charles Bronson Death Wish affairs, specifically the second one, Death Wish II! This is a movie that got terrible reviews, particularly from that old standby Roger Ebert! Ha ha, he hate-hate-hated it as I recall! I myself saw it many years ago when I was a young teen, or maybe even earlier, at the house of a friend whose family had just acquired laser disc technology! Ha ha, remember those? The d*rn things were a foot across!
I barely remember that viewing experience, but I did recall Ebert’s review! I thought, well, ha ha, maybe he was overreacting a bit! I mean, look at his review of Blue Velvet! Could be the same deal, I thought! I knew it was a kind of down-and-dirty picture, and moreover it was a part of the phenomenon I call Sophomore Slim! That refers to the strange propensity for the second entry in a movie series to be the shortest picture in their series, usually running about 87 minutes! You see it time and again: Friday the 13th part 2 (87 minutes), A Nightmare on Elm Street part 2 (87 minutes), Exterminator 2 (89 minutes) and so forth! Death Wish II runs 88 minutes! Ha ha, but it's important to bear in mind there’s absolutely nothing remarkable about this phenomenon!
Anyway, as I’ve mentioned before, ol’ Burl is not a big fan of r*pe scenes in movies! It’s not because I’m a sensitive new-age fellow, though I am that, but mostly I just find them really unsavory! And perhaps it was watching movies like Death Wish II (which seems to be all r*pe all the time) and Savage Streets at such a young age that gave me this attitude, so maybe I should be grateful to them!
In any case, Death Wish II follows the same path as its predecessor! Bronson plays Paul Kersey, a former New Yorker who has relocated to L*s Angeles, where, strangely, he seems to have become the in-house architect for a radio station! Tragedy befalls his family when a local r*pe gang steals his wallet, then goes to his house and performs one of the most hideously protracted sex*al assault scenes outside of Irreversible on the poor maid! Then when Bronson and his daughter, who is still traumatized from her r*pe in the first picture, arrive home, they bop him on the head, kidnap the daughter, r*pe her too, then chase her out a window from which she plummets to a gruesome death by transfixion!
Ha ha, after that, the stone-faced Bronson dons a street-bum outfit and takes to the streets, where he very implausibly tracks down the gang members, and takes out a few extra muggers and another r*pe gang in the bargain! The cop from the first picture, Vincent Gardenia, follows him from New York, but then is blasted by the gangs! And it ends in a hospital where Bronson is helped out by a bearded orderly played by John Carpenter mainstay Charles “Halloween” Cyphers!
All of this is done very badly! The movie at once is a surprisingly realistically depiction of gang violence – namely, it’s messy, skeezy, disorganized and boring – and a boneheaded revenge fantasy that can’t even pull off its Neanderthal idea of catharsis! It goes without saying that the political nuance on view here is of the single-celled variety, but even in filmmaking terms, the movie is so inept it’s almost shocking! So, in short, Ebert was not overreacting to this one – ha ha, you had the right idea, brother!
I’ll refrain from saying more, because it’s just not worth it! Because Bronson has his own appeal, because some of the gang members are actual, decent actors (Kevyn Major “Full Metal Jacket” Howard, whom I always took to be the lost Howard brother, and Laurence “A Nightmare on Elm Street 3” Fishburne are among them) and because buried within the awful music by Jimmy Page, there is one halfway effective track, I’ll give Death Wish II one half of a cheesy glass cat! Bleah, stay away!
Posted by Burl at 15:55