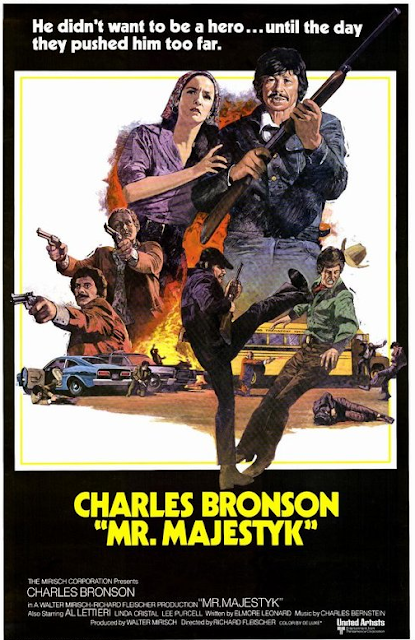 Hi, it’s Burl here, just getting the ol’ wet-dry vac! Yes, I’m here to review yet another picture featuring that carved-in-granite grandpa, Charles Bronson! This movie, Mr. Majestyk, is one of his better pictures, ha ha, and perhaps the only one in which he plays a vigilante watermelon farmer! It’s based on an Elmore Leonard book, and Leonard wrote the screenplay too, so you know it’s starting off with a pretty solid foundation!
Bronson is Vince Majestyk, and truly he is majestic in his zeal to get his melon crop in! But hoods, from the penny-ante variety played by Paul Koslo - yes Roy Boy from The Annihilators - to a sullen big-leaguer essayed by the gone-too-soon Al Lettieri, keep getting in his way! When, in a fabulous but heart-rending scene, they blast his melons to bits with shotguns, that’s more than enough for Majestyk! He’s taken all he’s going to take, ha ha, and with the help of his yellow pick-up, his lady sidekick and a shotgun of his own, he rights the wrongs done to him, and in the process proves himself a true melon farmer!
Of course we know Bronson from grotesqueries like Death Wish II and 10 to Midnight, but here, in the rocky open-air environs of the Great Divide, in his sporty cap and throwing melons like a pro, he’s a lot more appealing! This picture came out the same year, in fact the same month, as the first Death Wish, and it’s interesting to think what his career might have been like if this rousing adventure with its solid politics had been the picture that would define the rest of Bronson’s career, rather than the squalid, reactionary urban drama of Death Wish! Had that been the case I bet there would have been a lot more Indian Runners and a lot less Evil That Men Dos through that last quarter-century of his career! Ha ha!
But Mr. Majestyk remains a high point! It’s pretty clear that Leonard did his research into the world of melon farming and itinerant pickers, and his sympathies are with the underdogs all the way! Majestyk is no racist and doesn’t care where his pickers are from, nor what their status might be, so long as they pick a clean melon! And against this background we get some good rough-country car chases, some violence fights, some gun battles and some tragedy, and a lady named Wiley played by Lee Purcell from Eddie Macon's Run! It’s got that great clean look we find in many 1970s action-dramas, and the cars look and sound terrific! Ha ha, it’s one of those movies with auto manufacturer sponsorship, so everybody drives a Ford!
As ever, the Son of Bron is only able to muster a very limited array of expressions, but he manages to be likeable and believable! Mr. Majestyk is a solid if minor 70s crime adventure, and I give it two and a half watermelons!
Posted by Burl at 14:07