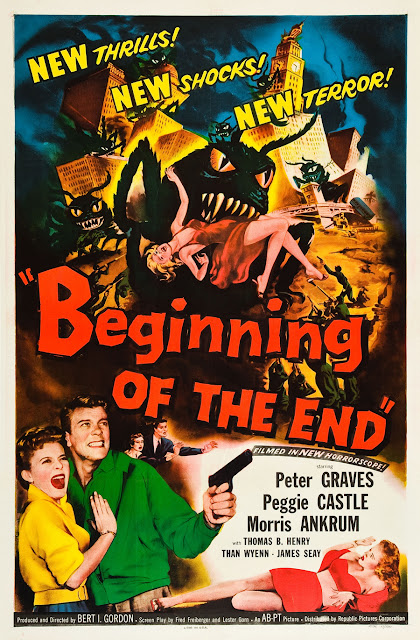 Fss fss, it’s Burl here with another giant monster movie to review! This is one of the big bug pictures of the 1950s, but I’m not talking about one of the great ones, like Them! or even Tarantula! No, this is Beginning of the End, and while I’ve always kind of admired the apocalyptic promise of the title, the picture itself sits down on the lower rungs of the genre!
It comes from Mr. B.I.G. himself, Bert I. Gordon! We certainly know of his ways, ha ha! He liked to make things turn big and then rampage! Of course his filmography is more varied than people think – look at Necromancy or The Big Bet, or his mad bomber picture, The Mad Bomber! But mostly he liked big things on the rampage, much as Charles Band has a strange obsession with things that are but wee!
Now here we have a picture about giant grasshoppers ravaging the Midwest, and our hero is a government entomologist played with marvelous stolidity by Peter Graves from Number One With A Bullet! It seems that one night a young couple are nibbled right out of their Lovers’ Lane automobile, and then shortly after that it’s discovered that an entire town has been destroyed by fiends unknown! Graves and a lady reporter (poor, doomed Peggy Castle) get on the case, and with stunning rapidity Graves deduces that some grasshoppers must have eaten the growth hormone he and his deaf plant scientist buddy have developed in order to create giant melons! So, yes, it’s a pretty direct rip-off of Tarantula!
The deaf fellow is eaten up pretty quickly, and the scene is notable for the fact that the actor, on being confronted by the giant grasshoppers, wildly pantomimes fear but, because he’s deaf, is apparently unable to utter any sort of sound! Soon the Army is fighting the bugs too, but they get overmatched, and it’s back to the drawing board! By this point, of course, Morris Ankrum from Giant from the Unknown is involved! Soon the hoppers hit Chicago, a heckuva town, and it looks like there’s no other choice but to drop nuclear bombs on the ol’ Windy City! But wait! Graves has a crazy idea that just might work – play a grasshopper love song on a barge in the lake and let them all swim out to their doom! Ha ha!
Well, we all know about the special effects here! It’s actual grasshoppers crawling around on picture postcards of the Wrigley Building! But really, that’s not quite fair, because there are some trick effects that work perfectly well, and even manage to give the impression that facing down a giant grasshopper in real life would be terrifying! You know, in my high school science class I did a research project entitled “Do Grasshoppers Have Lips?” The conclusion I came to was definitely yes, they do, and ha ha, I can tell you that I wouldn’t like to see those lips smacking in my direction!
It’s a silly little picture of course, sitting in the mid-lower range of the Big Bug genre, but that’s a genre I like, so I had a fine time watching this one! I’m going to give it two polygraph machines!
Posted by Burl at 23:43