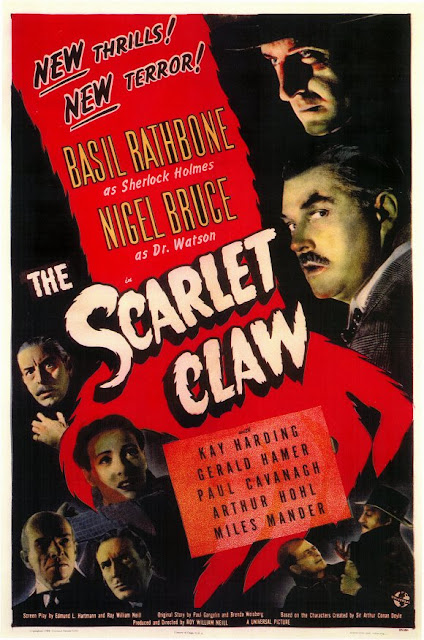 With extreme logic, it’s Burl, here to get Sherlockery on you! Ha ha, today’s picture is The Scarlet Claw, a Rathbone/Bruce special from the 1940s, and I have to tell you, I enjoyed it a great deal more than something like Sherlock Holmes: A Game of Shadows! Now that may seem an unfair sort of a statement, given how genetically perfect Basil Rathbone and Nigel Bruce were in their respective roles as Holmes and Watson, but quite frankly there’s no more delicate way to put it! Mssrs. Law and Downey Jr. will simply have to cope somehow!
In The Scarlet Claw, we find Holmes and Watson in Canada, of all places, attending a conference on the o-ccult! (Ha ha! Why would superrationalist Holmes be at such a thing?) As a Canadian myself, I was quite pleased at this choice of locale; but that’s as nothing to how I felt in the picture’s closing moments - but more on that later! The conference is being held in some city - Toronto? Ottawa? Montreal? - but soon the detectives find themselves in rural Quebec, in a small village that resembles any small village in any Universal picture set in Eastern Europe or England or wherever! It seems a fiend has ripped open good Lady Penrose’s throat with some kind of clawlike garden implement, and Holmes and Watson accompany the bereaved Lord Penrose from the occult conference back to the little town of La Morte Rouge! Local murmurings have a clawed phantom as the culprit, but Holmes suspects a flesh-and-blood killer! Of course he’s right, but who among the many shifty people in town could it be, and where did he get that marvelous glow-in-the-dark suit? Ha ha, one of the most atmospheric sequences in this wonderfully atmospheric picture involves the killer aglow, bounding through the foggy fens like a galloping ghost! I tell you, it’s fun stuff!
There are several gruesome murders and some spooky scenes (one of which Brian DePalma appears to have borrowed for Dressed to Kill, which, strangely, is also the title of a completely different Sherlock Holmes picture), and to me it took the old deerstalker quite a little while to put the pieces together; and when you get right down to it, you have to admit Watson falls into the bog a lot! The bog, of course, looks just like the moors in The Hound of the Baskervilles, and I do admit that this story is slightly derivative of that Conan Doyle original! But, ha ha, de rien, as the Quebecois say! It’s still a terrific little photoplay with a properly maniacal killer!
Once the mystery is solved and Holmes and Watson are pushing off, they share a conversation about Canada that really baffled me, with Holmes declaiming about the critical position the country holds in Western history and culture! I thought at first this was a manifestation of something called the Canadian Co-Operation Project, a shameful agreement with the Americans in which Canada essentially agreed not to have a feature film industry in exchange for the occasional promotional mention of Canada popping up egregiously in American films! That’s what happens here, with Holmes sounding bored and enraptured at the same time, rhapsodizing about the joys of Canada! But this picture was made in 1944, four years before the Canadian Co-Operation Project took hold!
As I say, it’s a mystery! But it’s merely quaint and bizarre now, and serves as the cherry atop this most delicious little mystery programmer! Ha ha, I give The Scarlet Claw three glowing suits!
Posted by Burl at 09:56