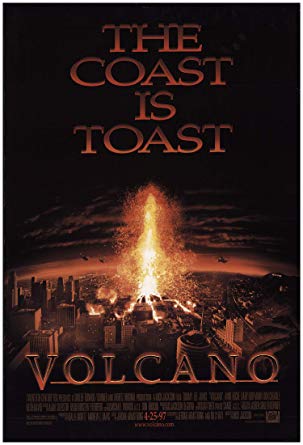 Boom boom it’s Burl, here to review some disaster for you! This is the other volcano movie of 1997, the one that wasn’t Dante’s Peak! No, this one is simply called Volcano; but was it the better or the worse of the two? Well, they’re just different enough from one another to make that question meaningless! Each has its champions, though, and for a long time I might have told you that Volcano was the better one! Now I’m not so sure!
What probably made it seem better was the slightly innovative location: downtown Los Angeles! Dante’s Peak was set just where might expect a volcano movie to be located: in a small town at the base of a volcano! In Volcano, an earthquake opens a caldera to the molten core, and soon it’s lava bombs, magma rolling down the streets, a massive cone rising from the La Brea tar pits! Emergency manager fellow Tommy Lee Jones, clearly saving his best stuff that year for Men in Black, tries to manage the emergency and his pouty daughter at the same time, and an artificially spiky relationship with geologist and Lady Who Saw It Coming, Anne Heche!
There are other characters too, like Tommy Lee’s underling, played by the very solid actor Don Cheadle, from Moving Violations, in a fine but largely wasted performance in which he virtually never leaves the office! John Carroll Lynch, that old son-of-a-Gunderson, plays a subway construction guy who takes the Murray Hamilton role of irritated nonbeliever until he redeems himself by horribly, hilariously, saving a subway driver by jumping knee-deep into lava, into which he melts like the Wicked Witch of the West! Ha ha! And Childs himself, Keith David from The Thing, turns up as a cop!
But the real star is of course the volcano and all its attendant spectacle! The trick effects hold up fairly well, and there are a few satisfactorily suspenseful sequences! The destruction is relatively small-scale when you compare this movie to, say, one of Roland Emmerich’s exercises in wanton ruination, or even something like Pompeii, but that’s not a problem! The problem, I guess, is the script, and the by-the-numbers approach to the whole thing! Ha ha, there’s a real sense that they figured the L.A. location was plenty enough innovation for one movie, and from there they coasted!
I do remember enjoying this one when I saw it in the theater, but really it’s one of the prototypical bland 1990s products! I give Volcano one and a half K rails, but most of that is for explosions and slow-flowing lava! Ha ha!
Posted by Burl at 22:55

Email ThisBlogThis!Share to TwitterShare to FacebookShare to Pinterest
Labels: 1990s, action, disaster, saw it on a date, saw it on the big screen