Burl reviews The Virgin of Nuremberg! (1963) 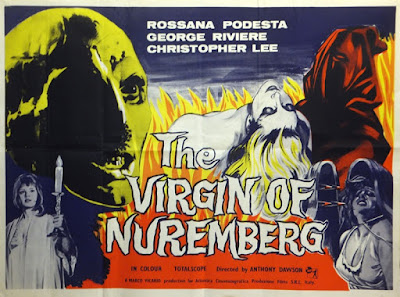 Ha ha, it’s Burl here with a little Italian Gothic! Yes, this picture, The Virgin of Nuremberg, is set in Germany and trades in some pretty German story points, and it has a particularly international cast, but it’s an Italian picture through and through! It’s very much a pastaland cousin to the Poe pictures Roger Corman was making around this same time, stuff like The Premature Burial! Ha ha!
But this is a touch more gruesome, sadistic, and horrible than the Corman movies, and that's saying quite a bit considering the Poe pictures include The Pit and the Pendulum and Masque of the Red Death! To give you an idea of where this picture's heart lies, the titular Virgin of Nuremberg turns out to be an iron maiden-type torture device, inside of which, in the opening minutes of the picture, an unfortunate young lady is found bloody and punctured!
The picture takes place almost entirely in and around an old house-castle, naturally! Mary Hunter, the young wife of Max Hunter, who I guess is a baron or something, has just moved in, and she spends the bulk of the film wandering the halls and staircases of the castle, discovering terrible things like that dead lady, and trying desperately to convince her husband that such dreadful happenings are occurring in his barony! But, ha ha, neither Max nor anybody else believes her - or, at least, they don’t seem to!
But of course there are secrets aplenty in this castle! There’s a legendary hooded torturer from the castle’s history, a Mickey Hargitay type more or less, who may have returned after hundreds of years’ absence! And why is Max acting so suspiciously, and why does the score thunder so menacingly on the soundtrack when he’s just sneaking up to give his wife a little kiss? And what is a disfigured Christopher Lee, that legendary heavy metalsman from Gremlins 2 and Starship Invasions, doing lurking around the castle’s museum of torture implements? And ha ha, why does the castle have a museum of torture implements?
Of course the secrets are revealed in the end, and there’s Nazi shenanigans involved! The actual killer is very creepy looking when he’s revealed, but is almost the sympathetic sort of monster we recall from movies like Raw Meat! And naturally, as in most of these tales, there’s a conflagration to cap everything off!
It’s a solid tale of Gothic creepsterism, enlivened by nice art direction and yucky trick effects engineered by director Antonio Margheriti himself! (Ha ha, Margheriti, who frequently worked under the name Anthony M. Dawson, took on the trick effects a lot in his pictures, even unto later works like Yor, Hunter From the Future!) On the downside, The Virgin of Nuremberg offers a slightly boring script, an overly bombastic musical score, and a general lack of common sense! But for those who love this sort of picture, these things are part and parcel of the package, and they - we, ha ha! - won’t mind much! I give this picture two and a half face-loving rats!
Posted by Burl at 18:14