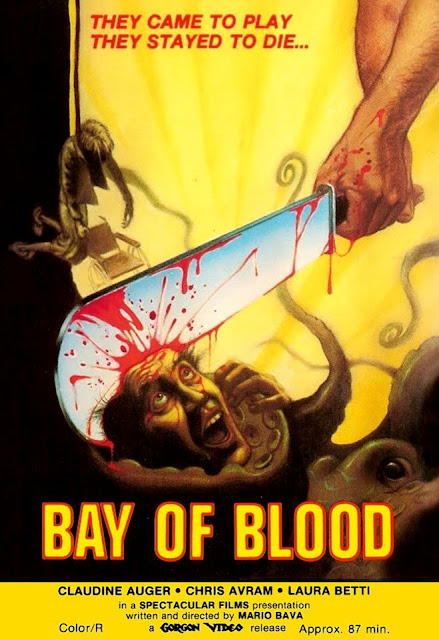 Bueno bueno it’s Burl! Ha ha, a funny thing about ol’ Burl is that I tend to rank Italian horror movie directors according to the gentility of their work! Essentially my taxonomy is based on what some may call the tastefulness of their productions, or the lack thereof, but it's not a rating system and has nothing to do with my estimation of their talent or how much I like their movies! So Mario Bava strolls with quiet dignity near the top, with Dario Argento somewhere beneath, Lucio Fulci further beneath that, and Joe D’Amato and Ruggero Deodato lurking on some still lower rung!
Today’s movie, which I’ll refer to as A Bay of Blood though it has many other titles to choose from, comes from that upper-ranker Bava; but it is, nevertheless, one of the goriest, meanest movies ever made by any of the pastaland blood-slingers! I mean, ha ha, it’s no Anthropophagus, but still! It’s got head choppings, slow strangulations, pokings of all kind, including a sexual transfixation; face slicings, shotgunnings and squid bitings! It’ll be no surprise to you that this picture is considered the old grandpappy of the slasher genre! Certainly it was a hefty influence on Friday the 13th part 2, ha ha!
The setting is a picturesque little bay which seems to be populated exclusively by murderers! An old countess is noosed right off her wheelchair, and the perpetrator of that crime, her husband, is straightaway poked at with a stabbing knife! We learn that the carnage is all because of the titular cove, which is, ha ha, coveted by everyone who lives on the bay, and by all of their relatives too! A quartet of feckless youths fall victim to the monstrous desire for seaside real estate as well, or at least to the desire others have to keep the area for themselves!
Bava started as a cinematographer (his first work was the Rossellini short The Bullying Turkey, which I hope to see someday just based on that title!), and he shot many of his own pictures, including this one! So it’s a little strange that it’s one of his less visually striking works - it’s got some lovely shots, but movies like Planet of the Vampires, Hercules in the Haunted World, Hatchet for the Honeymoon and Danger: Diabolik all seem brimming over with striking imagery, whereas this one is a little more fast and loose! Maybe it was simply a lower-budget picture with a quicker schedule than he was used to!
As brutal as the killings are, and as misanthropic the theme, A Bay of Blood is nevertheless a pretty entertaining satire! Once you realize that everybody is just killing everybody else, it becomes genuinely uproarious, and the last few minutes serve as the cherry on top, ha ha! Though future slashers would fail to take this or some equally clever approach, you can't deny the movie's influence on everything from Friday the 13th to The Burning to The Dorm that Dripped Blood to The Mutilator! For its transgressive jocularity, its historic importance and its full-colour carnage, I give A Bay of Blood two and a half cable knit sweaters!
Posted by Burl at 11:39