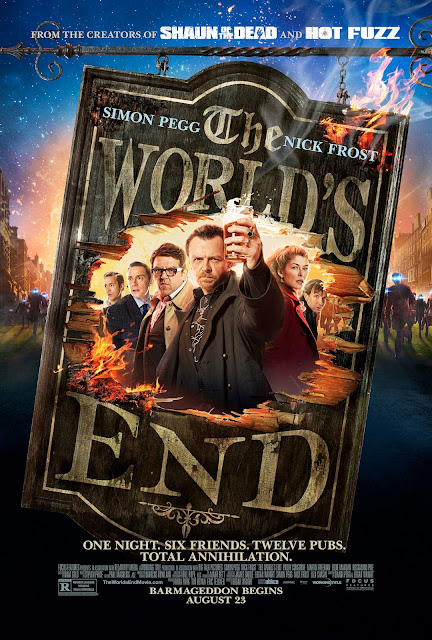 Ha ha and hallo sailor, it’s Burl, here with a ha’penny’s worth of English behavior and hard drinking! Yes, today’s picture is one of Edgar Wright’s chumedies, which is to say one of those pictures he made with his pals Simon Pegg and Nick Frost, whom we know from The Adventures of Tintin and Paul! This one is The World’s End, which begins as a funny but otherwise garden variety pub crawl picture, and halfway through becomes an alien invasion extravaganza! Ha ha!
Pegg plays Gary King, a middle-ager who at one time, in his younger days, was the big man in town, the cool dude with the rad crew, all of whom participated in a legendary evening of drink and debauchery in their home town of Newton Haven! But now, in his forties, Gary is a dissolute old hidebag who’s never been able to move on from that night of glory! And the hometown pub crawl was never properly finished, so, through a combination of subterfuge, wheedling and naturally persuasive charisma, Gary manages to round up the old gang to have a go at it again!
And yet the old home town seems to have changed in some indefinable way! Bartenders look the same from one pub to another, the pubs themselves have been homogenized, everyone gives them side-eye or the outright hairy eyeball, and almost nobody in town seems to remember them! The lads run into their old teacher, Mr. Shepherd, played by Pierce Brosnan from Dante’s Peak, who does remember the quintet! Ha ha, he gives one of his finest Pierce Brosnan performances here, I must say! But of course, along with most of the townsfolk, he’s one of them!
And just what are them? Ha ha, aliens of course, of a particularly patronizing and supercilious variety! Their methods are explained over and over, but somehow never really become clear; but the upshot is that many in the town have been replaced by hollow automatons (they resent being called “robots”) with particularly fragile bodies filled with blue printer’s ink! And as the fivesome - well, the sixsome once they hook up with the equally bewildered Rosamund Pike, whom we may recognize from Jack Reacher and Gone Girl - continue their bar crawl, they must deal with more and more of these alien drone-people, before the movie more or less lives up to its name, ha ha!
Like all of these Wright/Pegg/Frost pictures, from Shaun of the Dead to Hot Fuzz and beyond, The World’s End is fast-paced and amusing, and clearly the work of people who watch and love a lot of genre movies! But there’s a self-awareness too, of course, embodied in the character of Gary! He has a few moments which might hit home to those of us around the same age; those of us who may not have grown up completely; those of us who may like a glass of beer now and again! But there’s a comfort there too, because - and I’m speaking only for ol’ Burl here, ha ha - we’re nowhere near as far gone as he is!
For its obvious and heavy-handed, but no less true message; for its frequently uproarious Englishness; for its veneration of the good old pint; for its apt-too-apt soundtrack; and for that moment when Brosnan claps his hands, snaps his fingers and says “Pretty cool, eh?” in that tone we’ve all heard from teacher, I give The World’s End two and a half old mix tapes made for you by a friend!
Posted by Burl at 15:23