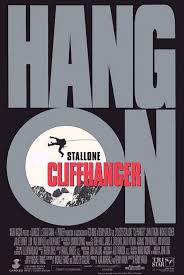 Stay back from the edge everybody, it’s Burl here with a review of 90s action! I’ve provided such reviews before - ha ha, remember logampompadors like Drop Zone and The Hunted? - but today’s picture, Cliffhanger, is one of the taller rock formations on the 90s action landscape! Not because it’s all that great, mind you, though it’s pretty entertaining; but in action-historical terms, we must note that by placing Sylvester Stallone on the edge of the abyss, it yet drew him back from the abyss! Ha ha, he was loading himself up with lead weights like Oscar and Stop Or My Mom Will Shoot and preparing to dive right in there, never to be seen again!
Having directed Die Hard 2 in 1990, Renny Harlin was well positioned to become a 90s actionmaster (though he overplayed his hand, ha ha!), and Cliffhanger shows him right in that sweet spot! The picture opens with its most memorable scene: a rescue climber played by Stallone (that grim-faced actor we may recall from Cobra) fails to stop his pal Michael Rooker’s girlfriend from plummeting into a chasm! Well, some months later, just as a sad Sly returns to his mountain town, an airborne heist orchestrated by none other than John Lithgow goes terribly wrong, and when the Rocky Mountain Rescue folks are called in on false pretenses to help out, it’s shoot, stab and plummet time in the mountains!
Ha ha, Lithgow affects a plummy accent that is somehow faker than his Emilio Lizardo voice in Buckaroo Banzai, but he makes a real meal of the role! His gang includes shouty Rex Linn from Night Game, who lays a salty tongue on all in his vicinity; Gregory Scott Cummins, the star of Action U.S.A. himself; the singularly named Leon from Bats; and a lady who is either the poor woman’s Kristin Scott Thomas or the very poor woman’s Emma Thompson! All of these characters meet a sticky end at the bottom of a chasm, or the tip of a bullet, or the pointy end of a stalactite!
I have to admit that 90s action movies intrigue me, and that’s perhaps because they’re such an ordered progression from their 80s forbears! It’s interesting to watch this kind of evolution! Now, I’m not saying they’re better, and in fact I assert that they’re not, but they’re different in incremental ways! They appear to have taken certain things that 80s films showcased, like the privileging of action setpieces, or the all-important gimmick death of the heavy, as an instruction manual, and created entire movies according to these directives! Ha ha! And I’ll get to a lot more of these movies, I’m sure: Speed, Hard Target, Eraser, maybe Under Siege and The Rock, and Demolition Man and other such things! But not Bad Boys! I hate Bad Boys!
Anyway, back to Cliffhanger: it’s often very silly, and really just a dramatization of how badly wrong a supposedly clever heist can go; but on the other hand the stunts and mountain photography and the Italian Alps locations are all very impressive! Of course, by the spring, when the snows recede up the mountain and the yetis wander down to take their pleasure in the local fatboys, you’ll have completely forgotten it, except maybe that opening scene! I give Cliffhanger two stylish old mountaineering sweaters!
Posted by Burl at 16:29