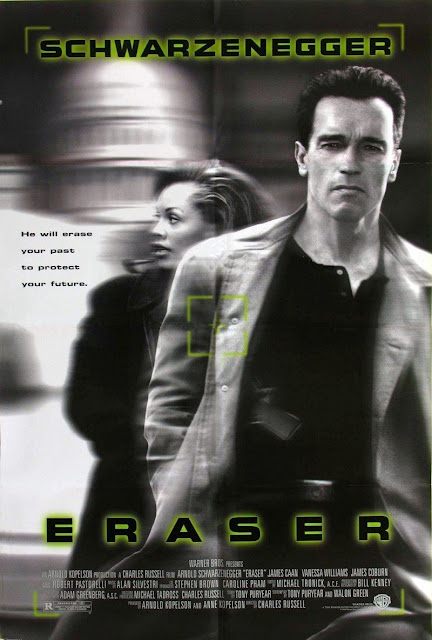 HA-LLO DIS IZ BURL! Ha ha, as you can tell from my note-perfect Arnold Schwarzenegger impersonation, I’m reviewing an Arnie picture for you today! It’s late-mid period Arnie, after he graduated to comedies like Junior, but before he got into his Grizzled Old Muscleman phase! Evidently as the second half of the 1990s began, he felt like dipping a toe back into the R-rated action of his earlier years, when he was doing pictures like Commando and Raw Deal and the like; and the big-budget nubscrum that resulted is called Eraser!

Arnold is of course the titular Eraser: an agent with no life, back story, or personality, who works for the Justice Department, giving new identities to witnesses and informants and folk of that nature! In the opening scenes he does just that for a low-level gangster played by the late Robert Pastorelli, and then we meet the main erasee, a lady called Lee, played quite well by Vanessa Williams, who’s ready to give up the goods on the shady armaments company she works for by recording them through a hideous brooch camera! Here we get just a kiss of science fiction, because the company’s newest invention is something called a “rail gun,” which shoots pellets nearly at the speed of light! Ha ha, in reality these pellets would just pass through a body and it would take a second before the victim even noticed, while in the movie if you get shot by one of these things, then of course you fly screaming all the way across the room and crash into the wall in slow motion!

James Caan from Misery is Arnie’s mentor and work chum, but it’s pretty evident he’s the bad guy right from the start! Of course maybe it’s not so evident, because James Coburn from Hard Times, here wearing a silver cocksman’s beard, is lurking around in the office scenes looking just as suspicious! Soon Arnie is on the run from the both of them; there’s a pretty impressively-sustained level of action-suspense once Arnie realizes he’s been betrayed and must jump off a flaming jet plane to escape, and then drives like a maniac to the zoo, where he must gunfight and battle alligators!

The picture slows down a bit after this, but I suppose it had to! It’s got a little sparkle to the script, maybe thanks to the participation of Walon Green, who also wrote Sorcerer and The Wild Bunch! Of course it’s pretty hard to say who wrote this lame-o bon mot or that goofy gay bar scene, so best to spread both the credit and the blame around as far as it’ll go! The sci-fi superguns are a nice addition, because that peps things up a bit! Whenever one of the rail guns starts shooting, it leaves a trail of expanding blue smoke rings from every supersonic projectile! It’s an effect I liked well enough, but not nearly as much as the filmmakers liked it themselves: ha ha, it must happen a million times! I bet the animation artists got tired of drawing blue smoke rings!

The  climax is a pretty bog-standard shipyard shootout, with the addition of a lot of blue smoke rings of course; and then there’s a final revenge scene that’s hard not to read as a fond fantasy from people who might like to see sterner measures taken against real-life perpetrators of similar crimes! Ha ha, this is an Iran-Contra movie just the way The Parallax View is a product of Watergate, though of course Eraser is far and away the weaker film I think it should go without saying!

It sits squarely in the middle of the 90s Hollywood action pack: not nearly up there with Speed or The Fugitive, but cheek by jowl with Passenger 57 and Con Air on the ho-hum-hell-why-not shelf! It’s got a fine action look from cinematographer Adam Greenberg, a nice scene of henchmen getting crunched by alligators (which beasts are brought to life by both animatronics and rough mid-90s digital trick effects), and a reasonably brisk pace! Making a smart political thriller out of this material might have been nice, but these particular filmmakers just weren’t interested in doing that! I’m going to give Eraser two concerned bartenders!
Posted by Burl at 23:11