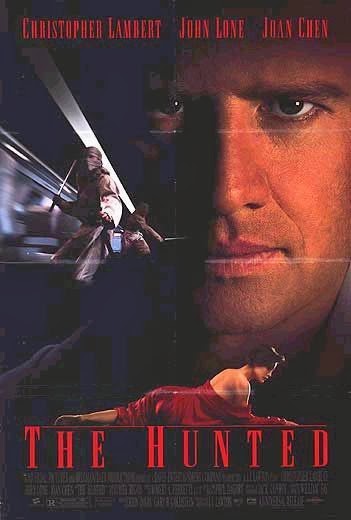 Hi, hi, it’s Burl! It’s another action picture review today, and the action picture in question is the slightly bizarre mid-90s oddbird The Hunted, which, believe it or not, ol’ Burl caught in the theatre way back when! Yes, this is the movie which features both Christopher Lambert and swords, but rarely in the same shot! Ha ha, there can be only one in-deed!
Being as it comes from the director of Cannibal Women in the Avocado Jungle of Death, it should be no surprise that the movie is weird! It’s weird in a different sort of way though! For instance, when you hire an actor years past his sell-by date, whose most renowned work is in a beloved sword movie – Highlander, for those not in the know – and then spend most of the picture having him simply cower in the corner while others do the swordfights, you’re being a little bit perverse!
Lambert plays Paul, a New York necktiesman with a heavy French accent doing computer chip business in a Tokyo that seems populated largely by Chinese people! He hooks up with beautiful Joan Chen for a night of love, but is surprised when suddenly some ninjas appear and chop off her head! They try to kill Paul too, but he survives, which makes head ninja John Lone, whom we know from King Kong, very, very angry! Paul becomes the Hunted of the title, and surely the ninjas would have got him too, if not for the sudden appearance of a crabby swordsman and his wife, who make it their mission to use Paul as bait so they can get that John Lone!
Any review of this picture will tell you that it peaks around the midpoint with a massacre on a bullet train! The ninjas slaughter everyone, car by car, on their way to get Lambert, but the frowny-face samurai gets in their way! Ha ha, it’s pretty great how he strolls insouciantly through the cars and puts a savage poking on all the ninjas, staining their sandy-coloured daytime outfits a spreading crimson! And there’s a nasty ladyninja who, after losing her battle against the grumpus, shaves her face off for honour! Yikes, ha ha!
The movie slumps a bit after that, though there’s certainly more swordplay to come! The cringing Lambert eventually takes a bit of desultory training from a drunk, and is able to hold his own against Lone once the latter has been so gravely wounded by others that he’s barely able to stand! The picture ends with a headchopping that would do Highlander proud!
As I’ve mentioned in a few different ways, this is a slightly strange movie! It’s got some action scenes, but still somehow doesn’t qualify as an action movie! I’d maybe call it a ninja drama! Lambert’s character is even less heroic and skilled in the martial arts than Jack Burton in Big Trouble in Little China, but unlike that fine picture, this isn’t a knowing satire on the very concept of heroism and its inversely proportionate relationship with attitude! I believe, in fact, that it’s meant as a serious look at the ninja-samurai rivalry Japan was still grappling with in 1995! Ha ha!
It’s enjoyably trashy while it’s on – and mark Burl, friends, there’s real value in that! – but totally forgettable when it’s not! Many of the plot points and character motivations are utterly inscrutable! It’s trying, I assume, to be an updated version of that terrific Mitchum picture The Yakuza, but it ends up being something else completely! It's got a few obvious matte paintings (which I always like to see, ha ha!) and a wonderfully horrible morphing effect! As you can see from the poster, it strives for a classy patina it simply doesn't earn! I recommend it, though! I’m going to give The Hunted two pink-handled samurai swords!
Posted by Burl at 22:22

Email ThisBlogThis!Share to TwitterShare to FacebookShare to Pinterest
Labels: 1990s, action, martial arts, saw it on the big screen