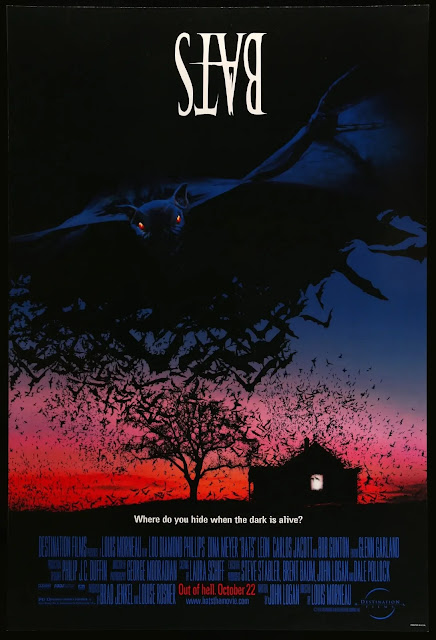 Ha ha and chiroptera, it’s Burl! Yes, I’m going bats today with a review of the 1999 gooseberry Bats, and right up front I suppose I must say that this is not a picture for which I’ll be going to bat! Ha ha!
Yes, Bats! I’ve reviewed bat pictures before, of course - ha ha, remember Nightwing? This movie is similar in some ways: both, for example, are set in the scrublands of the American Southwest, and both contain scenes in guano caves! Bats, however, stars Lou Diamond Phillips from The First Power as Sheriff Kimsey-Kimsey, the lawman of Gallup, Texas, which is experiencing the mysterious rippings-open of its populace!
Dina Meyer from Starship Troopers is the bat lady called in from her cavecrawling, along with her associate Jimmy, played by Leon, a.k.a. Leon Period or Leon Full Stop! At any rate, Leon was in Cliffhanger, if you can remember that picture! Ha ha, I can remember it, but that’s because I just watched it again last year! Bob Gunton from Demolition Man plays the sweaty mad doctor who created the bats simply because, as he says, “Ha ha, that’s what scientists do!”
There are plenty of attacks, including once scene in which the streets of Gallup get more crowded rather than less after a stay-home order is called (ha ha, something that’s perhaps happening as we speak!), and the citizenry of the cowpoke town only get to taking the threat seriously after it flies down from the sky to bite them upon the behind! This sequence also involves an unsavory bit wherein a bat is crawling in a crib toward a baby, but luckily we aren’t witness to the end result of this encounter! There’s an attack upon a school, empty but for our main characters, which features no shortage of sparky explosions (a feature of the entire movie), but also a cuisinart editing job that renders the scene a complete suet pudding!
The bats themselves, when shown in close-up, are little crawling puppet creatures with fixed, rubbery expressions of perpetual white-hot rage! In longer shots with great masses of bats, CGI trick effects are used, and these sometimes look pretty good and at other times seem more the work of the fellow who brought us Birdemic! There are some nice, effective moments in which all the bats turn their heads and show us their little yellow eyes, and many ridiculous but fun bits showing the bats’ extraordinary rending-tearing abilities! Ha ha, and in the R-rated version, which is clearly the one to watch if you’re going to watch it at all, there’s some brief, gloopy gore!
So that's okay, but the picture is also terminally rote and frequently stupid! We can practically see the script, stage directions and all, unrolling as the movie progresses! And the attempts at style, with constant unmotivated camera moves, pointless use of distorting lenses, desperately frantic editing and dumb, unscary whooshing sound effects, are all very late-90s and frankly quite irritating! Bats has its moments and its beauty shots, and there’s certainly some ambition at work here; but all of this is generally obscured in a morass of contrived effects, and in the end I give the picture one panic-headbutt through a windshield!