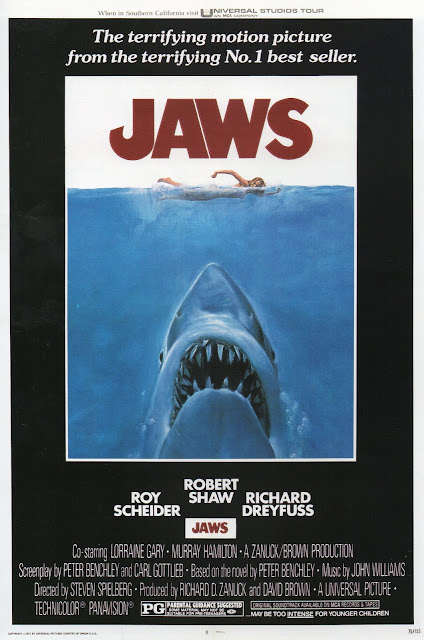 Doo-doo! Doo-doo! Dum-dum-dum-dum, dum-dum-dum-dum, dootle-dee! Ha ha, no, don’t worry, it’s not Jaws, just me, Burl, swimming up alongside of you here in the sea! Yes, I’m here to review Jaws for you, a very special movie and the best one Steven Spielberg ever made!
I saw Jaws at the neighbourhood theatre when I was just a tiny sprout! Ha ha, I was probably much, much too young to be taken to such a picture, but thank goodness I had liberal-minded, easy-going parents! It was a formative experience, one I still remember very well! I particularly recall being terrified when Ben Gardner’s worm-ridden head came rolling out of that boat hull, and shocked and amazed at the fountain of blood spouting up from poor Alex Kintner’s torso! On the way home from the movie we stopped at a neighbour’s house and my dad told him we’d just been to see Jaws! The neighbour, a real card, asked me if I wanted to come to his cabin and swim at his lake! I got excited and said sure! But he was only joking, I guess!
Clearly I don’t feel any great need to review this particular movie in the accepted sense, as everyone has seen it and there have been many thousands of words written about it! I’ll summarize it for the one guy who maybe hasn’t seen it, though: a Great White shark puts a biting on people off the shores of a small island community, and it’s up to the local police chief,  a crusty sea captain, and a young ichthyologist to go out and hunt up this terrifying predator before he can munch down on anyone else!
Those are the broad details, but by now I’ve seen this picture so many times that it’s more a collection of small pleasures for me now! I love the beachtown atmosphere of the first half, even including the cheeseb*ll mayor and his anchor-patterned sportsjacket! I really like Chief Brody’s reading area, his little desk in the windowed corner of his house with the great view of the sea and the evening sky! I like the visual motif of the snow fencing that seems to be everywhere on the island! I greatly appreciate the pants on the young lady who is painting and spots Jaws going into the estuary for a quick meal!
Ha ha, I like the excellent prosthetic limbs they use for Jaws's victims! I like the shot of Pippet’s stick floating in the water, though of course I was sad about Pippet himself! I like the way doomed Ben Gardner helps Richard Dreyfuss from the boat and says “Hello! young feller.” I like Captain Quint’s silent little old buddy who follows him around!
Of course I like the Indianapolis scene, but then so does everyone! I like the way Chief Brody doesn’t participate in the scar-off, but glances down at his own torso, perhaps recalling a bullet or knife wound he’d suffered in the course of police duty! I like the animated barrel lights and meteors seen periodically through the second half! I like the call of the whale!
I like most of the performances, even that of Bad Hat Harry! (I wasn’t so hot on Brody’s wife’s performance though, but it’s not terrible I guess!) I do wish Spielberg had found a part for Dick Miller, perhaps as the sea captain (though Robert Shaw is excellent) or the mayor (ditto Murray Hamilton), but we’ll always have Miller’s performance in Piranha, so that’s okay!
And there’s a lot more pleasure where that came from! I could watch this movie many more times, and I probably will! And I’ll very likely show it to my own son at some vastly inappropriate age! I give Jaws four panics on our hands on the Fourth of July!
Posted by Burl at 12:27