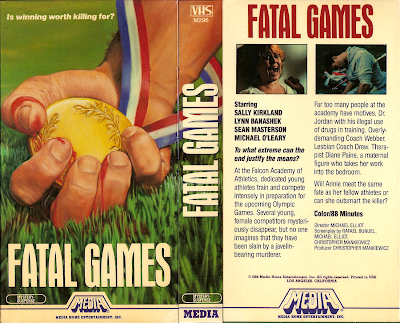 Well hello! It’s Burl here with, what else, a review for you! Ha ha, I can’t really defend this strange affection I have for early-80s slasher movies, but I’ve got a case of it for true, and it’s not going away! I don’t like them all unreservedly or anything – often they can be boring or just plain dumb! In fact, most of the time they are, but still, I have an appreciation for them that nobody can take away!
Anyway, Fatal Games is one of the more obscure of these pictures, and though the copyright date says 1984, it seems like it was made even earlier! It takes place at some kind of athletics academy where, throughout the first act, a series of characters qualify for “The Nationals,” and happy they are about it too, for The Nationals are just one step removed from a spot on the Olympic team! (Maybe that’s why this was released in 1984, to capitalize on the ’84 Summer Olympics in Los Angeles! Ha ha, very clever! I wonder if it worked!)
At any rate, somebody who is a very good javelin thrower apparently has a grudge against these Nationals qualifiees and begins spearing them and hiding their transfixed corpses in the lockers! These disappearances arouse only the mildest concern among their peers and the school’s four staff members, and in the meantime the gymnastics and copious nudity continue! Ha ha, if you ever wanted to see naked ladies, this is the movie for you! There’s lots of them in here! 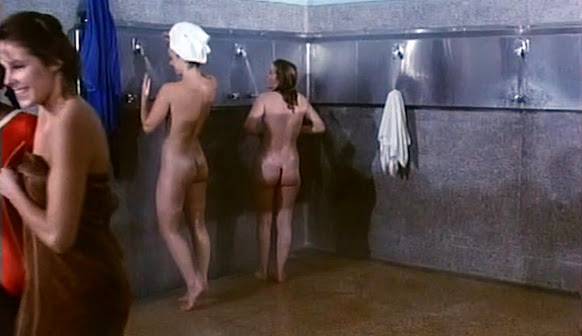 The movie pretty much follows all the slasher film conventions, which is more or less a good thing! I have a little checklist of values for these things though – strictly mental – and one of the items I look for is whether or not there’s any actual gore! I’m not what you’d call a goremonger, but I think it’s part of the contract these pictures make with their audiences: there should be a little bit of the red stuff! And I don’t just mean a few drops of stage blood or a retractable knife, I mean special effects that actually have to be made and applied and filmed with some panache! Halloween, as I mentioned in the review of that excellent picture, doesn’t have any such things, but that’s a very special case! A movie like this one or Final Exam or Sorority House Massacre really skates on thin ice by ignoring that simple obligation!
You can usually tell simply by glancing at the credits and seeing if there was someone in charge of Special Makeup Effects! If not, chances are you’re getting a pretty dry picture, and I guess Fatal Games fits that bill! However, with all that said and my rant at an end, I must say that I truly enjoyed this goofy little number nonetheless! Sure, it would have been nice to have a little variation in the killings, as there are lots of possibilities when it comes to athletic equipment (you can see a picture called Graduation Day for an example of some of them – ha ha, spiked football!), but the general amusing goofiness on display here makes up for it! And the revelation of who is doing all the killing has to be seen to be believed! Though to be sure, it’s not the only time this particular motive has been tried on for size in a movie like this, but it might be the funniest such attempt!
For doggedly hitting almost all the slasher movie marks, for giving us a marvelously terrible theme song (“Take it to the limit and don’t look back now /  Take it all the way / No second chance, you’re on your own now / Winning isn’t everything / Winning is the only thing / Ha ha!”) and for providing some pretty excellent javelin murder scenes, even if they are a bit dry (couldn’t one of them have gone through someone’s head or something?), I give Fatal Games one and a half trips to The Nationals!
Posted by Burl at 14:58