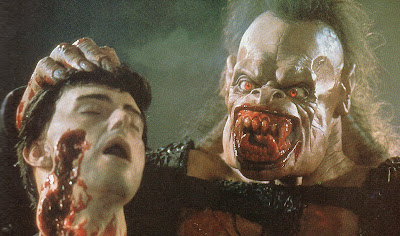 Hi, Burl here to review a monster movie! It’s not the best monster movie ever made, and the monster in it isn’t the best monster ever made, but it’s still just a plain and simple monster movie, along the lines of Prophecy, and sometimes that sort of simplicity is just what the doctor ordered!
The monster and the movie share the same name: Rawhead Rex! Of course it’s based on a story by Clive Barker, and since Barker wrote the script too, it follows the story pretty closely! Except he changed some of the names for some reason, as though he was adapting a true event and wanted to protect the innocent! Ha ha! He also changed the location of the story from rural England to Ireland, or maybe it was the producers who changed the location because they could get some good tax credits or cheaper labour there! Who knows! The location change doesn’t alter much about the story anyway!
It seems there’s a monster living under the ground near a small village, a decidedly un-jolly green giant put there hundreds of years ago by some previous generation of villagers who then erected a big stone penis on top of him! But they forgot to leave any sort of warning about the huge, savage monster man buried beneath the fields, except to make a little representation of the whole affair in stained glass and stick it in the church right next to the rectory!
Rotten luck: just as the big green man escapes his earthen custody, an American historian researching something about churches happens along with his family! The mayhem starts up in earnest, and among the victims is the historian’s son! So now it’s personal! The historian calls upon his historian superpowers to devise a way to beat Rawhead, and in the meantime, ol’ Rex does his thing at a trailer park and here and there around the village! Heads and hands and all manner of body parts are wrenched from their moorings! Ha ha!
Some might say wait a minute, ha ha, is Rawhead Rex really a monster? Because monsters don’t wear clothes! Well, it’s true that he sports a sort of shredded leather jerkin, and that he has hypnotic powers and seems quite crafty in his diabolical way, but I still say he qualifies as a straight-up monster! I mean just look at him! By garr! But while he’s got a pretty good look, the trick effects that are meant to bring him to life are a bit of a cruickshank! He’s a bit on the stiff side, and his expression doesn’t ever change much!
The optical trick effects are a similar let-down! I can imagine what Barker wrote in his script, and the sort of thing he had in mind for imagery such as the historian’s view of Rawhead standing majestically on a distant hill in the moonlight, clutching a severed head; but there’s only one word for the final product: cheeseball! Ha ha, the ending has what the filmmakers suppose to be a magical light show in the vein of Raiders of the Lost Ark, but it looks more like a Maximum Ice ad from the late 80s!
Those effects and the often-ridiculous dialogue undermine the film, but I do like a monster movie, and I also like movies with ancient Anglo-Saxon myth as their foundation! (That’s one of the things I like about Halloween III, for instance!) And of course it’s always grand when a head-munching monster is stalking the countryside! I give Rawhead Rex two creepy vergers and a wish that the filmmakers had tried a little bit harder to make it good!
Posted by Burl at 11:34