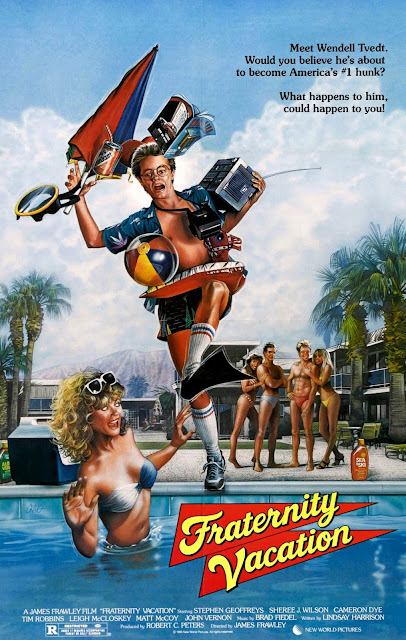 It's Burl talking! I’m sure you all know and are fascinated with Stephen Geoffreys, the fellow who played Evil Ed in the original Fright Night! Ha ha, if you’ve ever seen this delightful individual, you can hardly have forgotten him! And did you know that along with his supporting part in Fright Night and his role as the handsmith in Heaven Help Us, he had a few starring roles in other pictures? Yes, it’s true, and although many of his roles were in movies not likely to get discussed here, Fraternity Vacation seems like a pretty good candidate for a review from ol’ Burl!

There’s a black and white prologue, which is pretty unusual for a movie like this! It’s a Wizard of Oz thing I guess, because it starts out in Iowa during the winter and then the bulk of the movie is in Palm Springs, and that part of course is in colour! It seems the very nerdly Wendell Tvedt, played by Stephen Geoffreys of course, is a rich pig farmer’s son, and his father, played by ALF’s dad I think, is paying not just for his trip to Palm Springs but for his prospective frat-mates Mother and Joe also! Mother and Joe are willing to tolerate Wendell because of this, but only barely! And Mother is played by none other than Tim Robbins!
Well, there are some rich guys from a rival frat in Palm Springs also, and they’re pretty rotten fellows, as rich blond frat guys always are in these pictures! Quickly a rivalry develops between Wendell’s quasi-friends and the other guys, and the main contest is who can make gentle love with a particular beautiful lady first! Wendell is a sweet-natured guy who just wants to meet a nice girl, so he has nothing to do with any of that!
The movie proceeds in episodic fashion from there, with lots of partyblasting and shenanigans enacted by a pretty interesting cast! You’ve got Stephen Geoffreys and Tim Robbins of course, but there’s also Geoffreys’ Fright Night castmate Amanda Bearse; Barbara Crampton from Re-Animator and Kathleen Kinmont from Bride of Re-Animator; Britt Ekland from Endless Night; Nita Talbot from Island Claws; ALF’s dad, who of course was the health inspector in Grumpier Old Men; and in the role of the angriest police chief ever, none other than John Vernon! Wow, ha ha!
The other notable thing in this movie is the weird fake-out with Amanda Bearse! She plays the daughter of the psychotic police chief, and she seems like a very sweet and innocent young lady, but then Wendell thinks he’s detected that she’s secretly mean, and he decries her as such in an impassioned speech which briefly brings a feeling of reality to the picture! But just as quickly something about that speech and some subtly oddball elements to Bearse’s performance conspire to make it seem like Wendell’s just managed to escape a looney-tune of the sort seen in movies like Play Misty For Me and Fatal Attraction or even Swimfan!
And by the end of the movie, united by their oppression at the hands of the maniacally belligerent Vernon, all the frat guys are friends, and all of them like Wendell! Since Animal House it’s rare to seen the Snob half of the classic opposition turn over a new leaf and become decent chaps! But it happens in this one, and that sort of leaves you with a good feeling about humanity at the end of the movie! That and all the mooning! 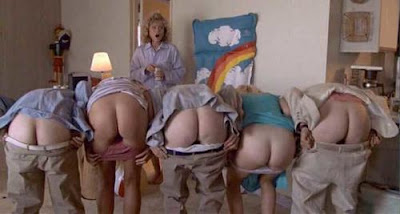 Ha ha, it seems like I’ve been finding good things to say about fairly dire movies lately, but I guess I’ll just continue on this positivity jag for at least one more review! I enjoyed Fraternity Vacation for much the same reasons I enjoy any of these movies in the winter: because watching them is like taking a tiny micro-vacation yourself! And the cast and occasional strange efforts to replicate actual human behaviour bring it up a couple of pegs from there! I give it two and a half exposed human buttocks!
Posted by Burl at 00:13