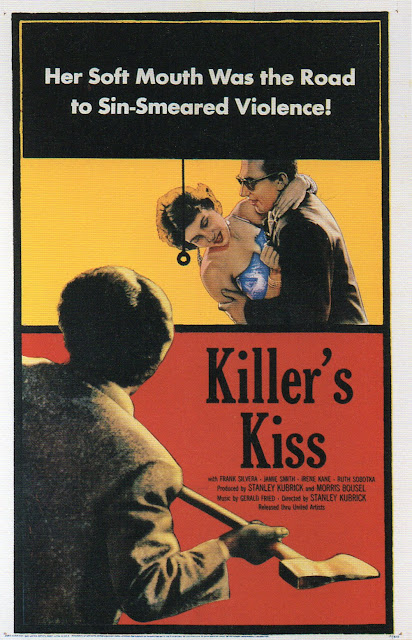 The door opens to reveal… Burl! Yes, I’m here to review another Stanley Kubrick movie, this time not a late-period movie like Full Metal Jacket, but one of his earliest productions, Killer’s Kiss! He made this one for a pittance way back when, after he’d only done a few other pictures, mostly short documentaries!
But he’d already had lots of experience behind the camera – the still camera that is, as a photographer for Look magazine! That’s probably why Killer’s Kiss looks so darn good! The fellow was just born with a good eye, I guess!
The tale is a pretty basic one! It seems there’s a boxer, Davy, who is cursed with an eternal glass chin! He fights Kid Rodriguez for the title and loses, falling to the canvas like a stumblebum! No matter how many times he shakes his head to clear it, he can never quite get his mojo back! Ha ha, in the world of the sweet science, he’s naught but a clumsy lab assistant!
But he lives in a dingy apartment with a view of the other dingy apartment across the courtyard, the tenant of which is a beautiful lady named Gloria who turns out to be a taxi dancer at a hall owned by a greasy mustachioed gangster-ish fellow, Rapallo! Well, Rapallo, who has feelings, is in love with his employee and visits her one night anxious to make l*ve! But Davy hears her screams, rushes to the rescue, and though Rapallo has gone, he manages to provide some comfort for the weepy Gloria! The next morning they put on the day, exchange tales of woe (Gloria’s involves a lot of ballet dancing) and begin very tentatively to fall in love!
Of course love never runs smoothly in a noir caper like this, and when Gloria tries to quit her dime-a-dance career to join Davy on a trip to Oregon, Rapallo’s thugs are waiting! In a case of mistaken identity they put a fatal punching on Davey’s fight manager, and then they kidnap Gloria! Davy tracks her down and then there are some ferocious fights – brittle-chinned Davy is of course knocked out easily in the course of one of them – and a nifty rooftop chase! The grand finale is famous for taking place in a mannequin warehouse, and it ends with a gruesome transfixion and a pitiful dying scream!
Ha ha, this is a great little movie, if probably not the one Kubrick was most proud of! It would certainly make a terrific double bill with Blast of Silence, which is just as good and even grittier and rougher, but unlike Killer’s Kiss was not the start of a legendary directing career! Kubrick’s picture has got some flaws, sure, like the weak story, the narrated flashbacks that are obvious narrative bandages, the rushed and improbable denouement and the fairly obvious techniques used to cover the fact that there is no audience and no auditorium in the boxing scene; but on the other hand almost every shot has some visual treat in it!
On balance, and though I admit my opinion is coloured somewhat by the film’s pedigree and the fact that I just like looking at shots of New York in the 50s, I’m going to give this little noir three soon-to-be-neglected fish!
Posted by Burl at 15:22