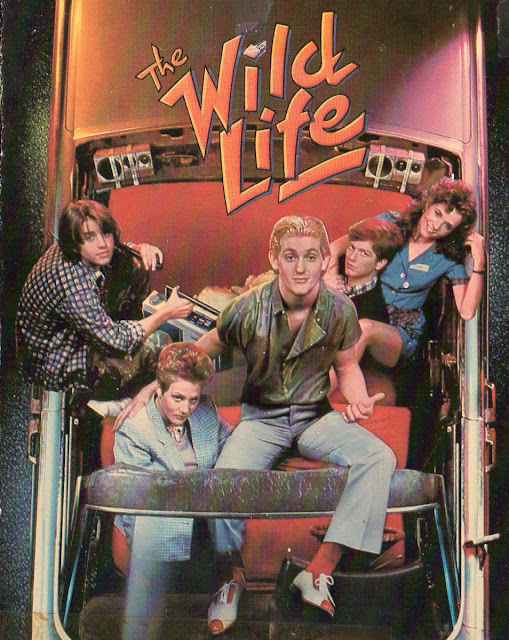 Ha ha! Ha HA! It’s Burl! I’m here to review another movie for you! This is one of those pictures that for some reason seems not to have ever been released on DVD, which perhaps means it’ll never make it to any future format either! I’m sure you can find it to watch somewhere on the Internet, but me, I’ll stick with my VHS copy, which is what I watched the other night!
I’d never actually seen this picture before, which is odd considering that I’m something of an 80s movie scholar, and am fond of Fast Times at Ridgemont High, with which this movie shares a few key elements! Both The Wild Life and Fast Times were written by Cameron Crowe before he got a little too interested in making bland pictures ol’ Burl has no interest in seeing! That happened pretty much right after Say Anything, to tell you the truth! As well, both pictures feature at least one member of the Penn family! Fast Times has Sean as the notorious, pizza-loving stoner Spicoli, and The Wild Life has Chris as a dreadful bozo named Tommy Drake, and also a brief appearance by their dad Leo Penn in the role of Tommy’s dad!
Both movies also have California locales, a general shambolic quality, and a bunch of characters who know one another but have separate stories and problems of their own! But there’s no actual narrative crossover or shared characters, so if you ever were under the impression this is some sort of Fast Times II, think again, young cowpoke!
Our characters include Eric Stoltz as Bill, a straight arrow of a fellow who has recently broken up with his girlfriend Lea Thompson and taken his first apartment at a high-life rental complex in his quest to become a single successful guy! Lea Thompson meanwhile is having a donut-shop affair with a bootblack handlebar mustache attached to a cop! Her pal Jenny Wright works at a crazy clothing store managed by Rick Moranis, whose hair and outfits here are crazier even than they were in Streets of Fire! She’s fending off both his advances and those of her sometime boyfriend, the odious wrestler Tommy! And Tommy decides to move in with Bill so that he can start a non-stop party parade! And of course we can’t forget Bill’s little brother, who is obsessed with Vietnam and practices nun-chuk-as in his room like the killer from Fear City! Ha ha!
The character of Tommy has got to be one of the more loathsome would-be charmers in movie history! I don’t know why, but I really hated him! He’s meant to be oafish but charming, clueless but big-hearted, and with his Made In California catch phrase, “It’s casual,” I suppose he’s meant to be cool and hip also! Ha ha, well, “It’s casual” made its way to the Great Dumping Ground Of Failed Catch Phrases pretty quickly, to lay beside gems like “Bau bau bau” from Surf II and “Be Scottitfitous, buddy” from Hardbodies! Tommy is just one of the most objectionable characters I’ve ever encountered in my long movie watching career! I don’t know why he rubbed me so very wrongly, but there was just something about him!
But I enjoyed the movie on the whole, since I do tend to like these laid-back, directionless teen comedies of yesteryear! I liked its loose ends, its supporting cast (Randy Quaid appears as a depressed, smack-addict Vietnam vet, and of course a Moranis appearance always brings a picture up a notch or two) and the random rock stars that showed up throughout! It’s not in the same class as Fast Times, but I rate The Wild Life a respectable two Ron Wood cameos nevertheless!
Posted by Burl at 17:35