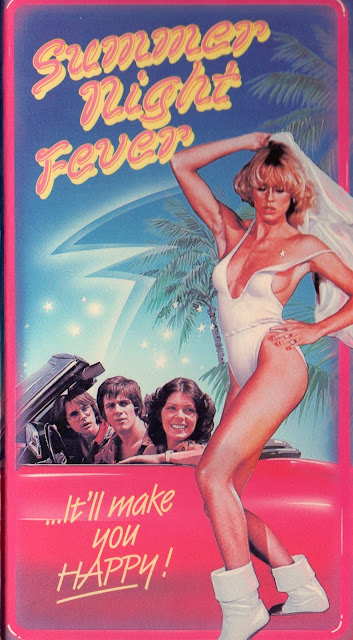 Burl’s here again! Ha ha, it’ll make you HAPPY! So says the copy on the video box of Summer Night Fever, and that kind of come-on is well nigh irresistible to a fellow like ol’ Burl! So I made no attempt whatever to resist it, and the result is the review you’re reading right now!
Here’s a grand teen sex romp in the great European tradition! Like The Wild Life, this one has never made the leap from VHS to DVD, at least not in North America, and the reason is probably the presence of the dreadful and expensive hit song “Baker Street” on the soundtrack, and also the fact that one of the leads wears a Mickey Mouse shirt for the first few scenes of the movie! Ha ha, those copyright issues will get you every time, particularly where irritating softrock saxophone riffs or good old Uncle Walt’s animation corporation are concerned!
Summer Night Fever begins in Munich with two buddies, Peter and Freddy, hanging out at a groovy Teutonic disco and the next morning hopping into Freddy’s yellow convertible VW Bug to begin a summer road trip to Ibiza! Ha ha, I’m already happy! But Freddy has a sister named Vicky, a glasses nerd, whom he is being forced to take along! This bums Peter out, and for the first time but not the last he declares that “This trip is ruined!”
But Vicky, while nerdly, is pleasant enough, and the film sets to documenting their misadventures as they drive through late-70s Europe with the same five or so songs recurring in alternating scenes! Their car, every bit the lemon its appearance would suggest, gives them nothing but trouble! Peter, a goodtime ladies’ man, can’t score to save his life because all the freuleins, femmes, señioritas and niña bonitas assume that Vicky is his girlfriend! In the meanwhile, shy, myopic Freddy is going to bed with every one of the more elderly ladies in the cast! And along the way, plenty of ladies take off all their clothes!
Well, if you thought driving across the continent was fun, wait till this little group reaches the Mediterranean coast! Yes, they hit hotspots like Monte Carlo, where they tangle with an incredibly louche Eurotrash yachtsman, and St. Tropez, where Freddy has a quick affair with his math teacher! Eventually their car is stolen by a melonman and his cohorts, but that doesn’t concern our heroes overmuch since it was always breaking down and stranding them anyway! A romantic misunderstanding separates Peter and Vicky, who were becoming closer along the way, and the whole thing wraps up on the legendary partyisland of Ibiza!
Ha ha, I have to say that, despite some irritating characters and the brain-melting repetition of some very strange quasi-disco songs, some of which sound like children’s music and bear titles like “You’re A Person Of Importance,” Summer Night Fever is a terrific treasure of yesteryear! I personally would have loved to go on a trip like this at that time in history, and since I was much too young and not European, this is truly the next best thing! I have to admit that the picture lived up to the letter of its video-box boast! It’s well-paced, nicely photographed and it delivers the goods! And of course it makes you HAPPY! Ha ha! And as a bonus, I was lucky enough to find the soundtrack album on vinyl, so now I have all those crazy songs to play at top volume in my home!
I give Summer Night Fever three narrowly (and thankfully) avoided date rapes!
Posted by Burl at 11:06