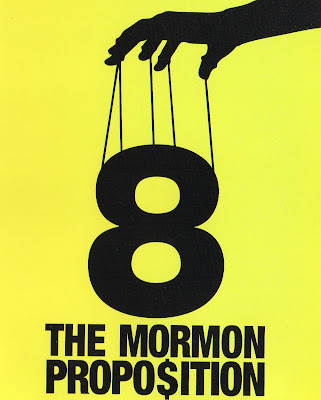 Burl here to review a documentary feature! This one details the machinations of the Utah Mor-mons who made it their business to interfere in the California proposition to ban gay marriage, which appeared on the ballot in November of 2008! I remember following this story and, frankly, making the assumption that the proposition wouldn’t come within a mile of passing; but I was wrong, and the lesson, I guess – and the lesson in this documentary – is not to underestimate how much organized socially conservative religious people are determined to interfere in other peoples’ lives!
So there’s an interesting and relevant story here, and with the recent judicial declaration that this proposition is unconstitutional, it’s timely once again also! So it’s pretty unfortunate that this tale is told in such a cheap, unimaginative and out-of-whack movie as this one! Let me give you an example of the movie’s approach! One of the interviewees is enumerating the elements necessary to influence a vote in a place as large as California! One, he says, is money! Cut to a shot of hands counting fake-looking bills! Two: volunteers willing to go door-to-door! Cut to a shot of someone knocking on a door! Three is something less tangible, like influence, and the filmmakers’ limited imaginations were unable to come up with a crashingly on-the-nose visual to go along with it, so they just show a shot of a building and leave it at that! Ha ha, nice try!
But I’m far from the ideal audience for this picture! It may shock you to learn this, but ol’ Burl is a fairly cosmopolitan guy! I live in a place where gay marriage has been legal for years, so I can tell you with cheerful certainty that it presents no danger to so-called “traditional” marriage or to the fabric of society! I don’t require documentaries such as this to endorse marriage for whatever consenting adults want it! I have friends who are in gay marriages and who are raising happy, well-adjusted kids, so I don’t need to be persuaded that these families are perfectly normal! The idea that anyone could think otherwise is what tends to surprise me! And I’m not in the least surprised to learn that Mor-mons were behind the big money push to influence the California vote! I thought it was common knowledge, but this movie presents it as though they’re unveiling a shocking and little-known revelation!
A gay couple whose marriage was rent asunder by these meddling Mor-mons are the default main characters, and most of their screen time is them telling us that they truly love one another and that they deserve to be allowed to marry the same as anyone else, and that it’s all about love! Since I take those things for granted, I was pretty much looking at my watch, waiting for the movie to go deeper! It could have presented all those things with some choice visuals, showing these guys at home or something, instead of having them repeat it over and over! But like I said, not much imagination at work here!
Still, I learned a few things! I’d never heard of this loathsome Senator Buttars guy before, and I could have gone through life quite happy never to have heard of him I guess, but now at least I can picture his horrible face as the proposition he so unctuously championed is undone by the very constitution he presumably would have had to swear allegiance to at some point! So maybe that made watching this thudding and ponderous doc somewhat worthwhile!
I certainly wish this had turned out better, because as I say, it’s an interesting story! Perhaps, as the story is ongoing, there is a more ferocious, more stylish and more dynamic effort yet to come! I give 8: The Mor-mon Proposition one single easily-pressured Mor-mon!
Posted by Burl at 17:05