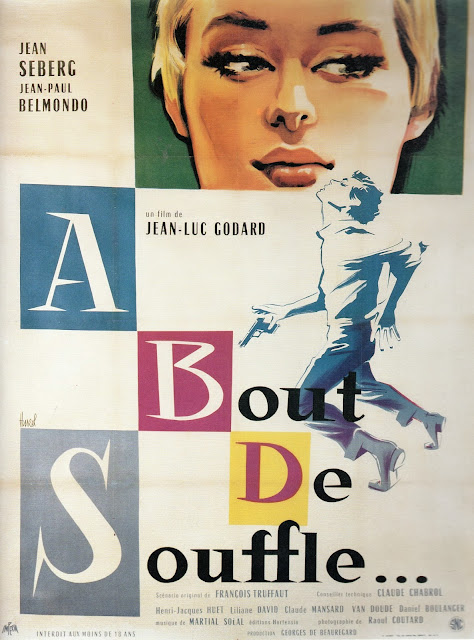 Bonjour, c’est Burl ici! Ha ha, aujourd’hui je vais revué le film À bout de souffle, par le grand réalisateur Suisse-Français, Jean-Luc Godard! But no, this whole review won’t be in French! I would make too many mistakes in my grammar, I think, and would thereby annoy my French readership, if I even have a French readership!
À bout de souffle is of course known as Breathless in English, and was Jean-Luc Godard’s first feature! I’ve been a big Godard fan for a long time, and until I watched this picture again the other night, I hadn’t seen it in years! Ha ha, it’s a great picture! I knew that of course, but I had a fine time reacquainting myself with this Gallic classic and realizing just how much it managed to change the motion picture arts as we know them!
Of course this wasn’t the very first movie to take the camera off the tripod and ignore the established rules of editing and mise en scéne, but it was among the first, and certainly was among the most popular! On top of that it’s a lustily entertaining picture, a movie about movies that’s a more effective tribute to the medium than a thousand of those stultifying “Aren’t Movies Great” Oscar night montages could ever hope to be!
Maybe you’ve heard of the movie but haven’t seen it, thinking to yourself “Ha ha, it’s just another boring, impenetrable avant-garde art picture!” No way! It’s a racy and thrilling crime romance that’s of much more than historical interest to anyone who appreciates a good genre exercise! The hero, Michel Poiccard, is played by the incomparable Belmondo, and is a Bogart-worshiping small-time Parisian crook who steals a car and then, cornered, commits a casual copicide! All the flics of France are after him then, but before he can flee the country, Michel needs to do two important things: get his hands on the money that’s owed him for past thieveries, and woo his tentative, impossibly cute American girlfriend Patricia into a dedicated, Bonnie-and-Clyde state of love! Then the two of them can run to Italy, and to freedom!
I won’t repeat the encomiums so many others have lavished on this picture! Ha ha, you’ll just have to see it for yourself and invent some of your own! You’ll be captivated by Belmondo and his habit of running his thumb over his upper lip in imitation of Bogie; with Jean Seberg and her fantastic pixie cut and New York Herald-Tribune t-shirt; and with Paris itself, just for being Paris!
One last note: I’ve often wondered if there was any connection between the character Laszlo Kovacs who is so often mentioned in the film, and the real-life Hungarian cinematographer Laszlo Kovacs, who shot Easy Rider, Ghostbusters and of course Butch and Sundance: The Early Days! Ha ha!
I give Breathless four enthusiastic Gauloises, and encourage you to check it out with all haste!
Posted by Burl at 23:05