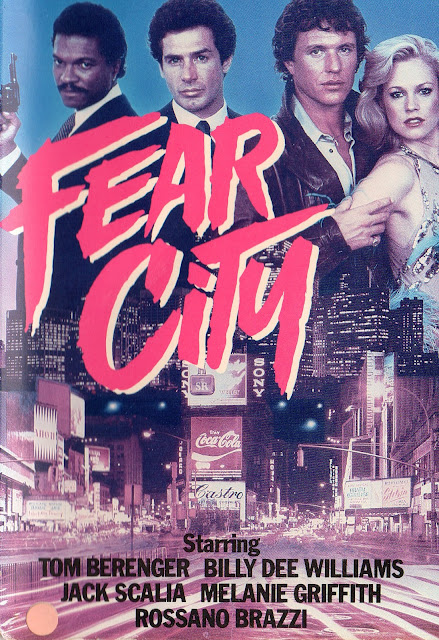 Hey and hah-trayah, it’s Burl! Yes, I’m here with another review of a motion picture, once again plucked almost at random from my basement VHS collection! This one is an Abel Ferrara movie I’ve never seen before, and it’s called Fear City! It maybe should have been called Sleazeball City, but I guess Fear City works pretty well too! It's part of that micro-genre of movies that are partially about psycho killers but are also part of some other genre too, just like Delirium!
It’s also part of that category of movies whose raison d’etre seems to be making New York look like the most horrible, gritty, dangerous and generally unsavoury place ever! There are mainstream movies that work on this theme, like Cruising, and there are low-budget pictures that do it even more persuasively precisely because of their low budgets (Maniac and Basket Case would be good examples of these); but Fear City, with its cast of recognizable faces and reasonable budget, fits somewhere in the middle!
It seems that Tom Berenger, whom we know from such Hollywood bumkins as Someone To Watch Over Me and Last Rites, is an ex-boxer who once boxed his opponent into the grave, and so he quit pugilizing – though his flashbacks won’t let him forget the incident – and started up a stripper management business with his pal Jack Scalia! Well, wouldn’t you know it, as our story proper begins, one of those self-righteous maniacs on a morality crusade decides to clean up the streets by practicing his various martial arts techniques on random exotic dancers, at first just mutilating them with scissors and knives, but soon working his way up to brutal murders!
Since the first two victims work for the Berenger/Scalia Agency, an incredibly angry cop played by Billy Dee Williams decides these fellows must know something about the tragedies! Soon a mobster played by Rossano Brazzi from South Pacific gets involved for some reason; and there are lots of ladies about too, like Melanie Griffith as the exotic dancer Tom Berenger loves, and Rae Dawn Chong as the exotic dancer Melanie Griffith loves, and Janet Julian from Humongous as the exotic dancer everyone loves!
Of course we all know that even with all these characters and plot strands and flashbacks, it’s all going to come down to the killer boxer vs. the chopsocky maniac, and indeed that’s what occurs! Ha ha, the fight is pretty good, and it’s always satisfying to see one of these extreme social conservatives – and he’s a brutal murderer too, don’t forget – receive the harsh and painful pummeling they deserve!
Ha ha, Abel Ferrara is a pretty interesting director! I guess he’s best known for Bad Lieutenant and King of New York, but he’s done lots of other weird pictures as well, like his own (pretty good!) version of Invasion of the Body Snatchers, just called Body Snatchers; a movie about Madonna and Harvey Kietel making love; and a movie adaptation of William Gibson’s New Rose Hotel! Fear City is one of his earlier productions, and despite running off madly in all directions plotwise, and presenting maybe too many scenes of exotic dancing, and featuring a lot more harsh, brutal violence against women than ol’ Burl is all that comfortable with, and losing its narrative thread like you would a worm in a bowl of rancid spaghetti, it’s not that bad a movie! I give it two long, wordless nun-chuck-a practices!
Posted by Burl at 22:44