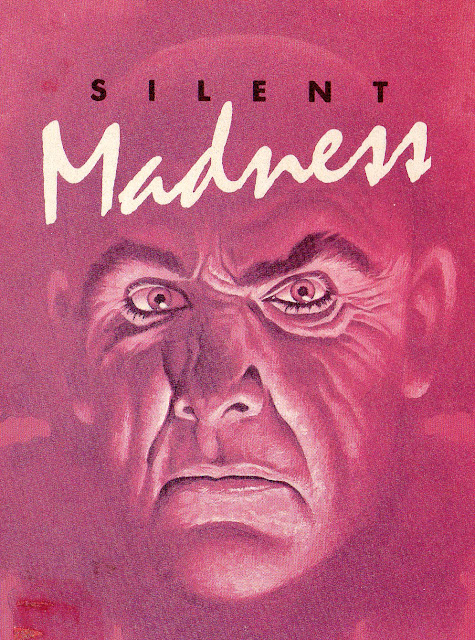 Burl! It’s Burl! Ha ha, another slasher movie to review for you today! I know that many of my readers enjoy these pictures above all! And this one, Silent Madness, appears to be especially loved by a small but dedicated contingent of motion picture admirers!
Some of you may recollect that one of my ongoing projects on this blog is to create a proper, if loosely organized, taxonomy of these slasher pictures! Mystery killers, faceless killers, deformed killers and motive-driven killers all ought to have their own comfortable categories in which to loll and plot their mayhem; movies which use the science and art of gore should be segregated from those which for some reason refuse to do so; and good movies must be separated from bad!
Where does Silent Madness sit in all this? Ha ha, well, let’s have a closer look! The plot in its broadest outlines is fairly scrupulously recycled from Halloween, actually: we have an escaped lunatic, a dedicated mind-doctor on his trail and a group of unwary goodtime gals directly in his path! There are a few victims along the way and a sheriff who refuses to believe the threat is real! From there, however, the two movies diverge pretty completely!
It seems that a pasty-faced individual named Howard Johns is released by mistake from a New York bughouse! He makes his way without delay to the small college town where, almost twenty years before, he’d been driven haywire by a brutal spanking inflicted on him by some sorority sisters! He’s never forgotten that bum paddling, nosirree, and he’s back to inflict revenge on all the current-day sisters of Delta Pi or whatever! (Ha ha, it’s all Greek to me!)
Feisty Dr. Lady is on his trail, and she in turn is pursued by a couple of incredibly sleazy and horrible orderlies from the hospital, who have been mandated by bughouse officials to kill Howard Johns and turn the doctor into a mental vegetable! Other characters mixed up in the action include the aforementioned sheriff played by skeevy Sidney Lassick from Carrie, Alligator and The Unseen; a soap-star type newspaper editor whose heroics consist of getting bonked on the head, tied up and locked in the back of a van; and the house mother played by the great Viveca Lindfors from Creepshow! Ha ha, it’s a pretty good cast actually!
Meanwhile Howard Johns has gone murder-happy, using a variety of relatively imaginative methods for his killing! He does a head-crushing in a vice, steams someone to death, tosses an animated hatchet and inventively uses a barbell, a rope and a window at one point as well! Some of the killings are fairly (almost uncomfortably) gruesome, and there’s a bit of actual gore here and there as well, and that treat for any slasher viewer, a credit for Special Makeup Effects! Ha ha, there’s also a special appearance by that great video game of days gone by, Dragon’s Lair!
Well, I won’t say too much more about this picture, except that it was made in 3D, so there are some things tossed, pointed and otherwise aimed at the camera lens! (The light-hungry 3D process also ensures that this is the rare slasher movie which takes place entirely in the daytime!) Also worth noting is the East Coast atmosphere, so different to the discerning viewer from the California or Midwest ambiances so often found in these things! And I must say it again: Viveca Lindfors! This is far from her greatest role, but I’ve always liked her, and her presence put me in mind of a picture called Last Summer in the Hamptons which I remember enjoying at a film festival once! Maybe I’ll watch it again and review it here sometime!
Silent Madness more or less delivers what anyone watching it deliberately might hope for, and though there’s an excess of plot and it gets a little chatty here and there, I’ll still give it two sudden nailgunnings!
Posted by Burl at 23:01