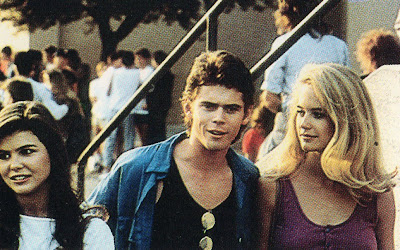 Well, again, it’s Burl reviewing at you! And how fun it is to do it! Yes, another comedy about the hormones of young people for you today! This one is a pretty mainstream example of that marvelous genre, and what it might lack in go-for-broke teen raunchiness it makes up for with its fine cast and reasonably strong script!
This one is called Secret Admirer, and it’s got a fairly gimmicky plotline that might sort of remind you or The Earrings of Madame de… or something along that line! It seems that C. Thomas Howell is one of those young high schoolers who’s got a good female friend who is also gorgeous and has an obvious crush on him, but whom he doesn’t consider romantically attractive for some reason! Instead C. Thomas has the hup-hups for a blonde girl played by Mrs. John Travolta! It’s similar to the dynamic we see in the same year’s Teen Wolf, where “Boof” is the neglected but loving pal! Ha ha, I guess 1985 was a big year for this sort of confusion!
Well, a love letter is written and passed anonymously to C. Thomas, and when his gaggle of pals find it tucked inside his arithmetic book, they convince him that it certainly must have been written by Mrs. Travolta! Well, confusion sets in all around the neighbourhood after that, spreading to anyone – kids, parents, other parents – who accidentally discover the letter or one of its follow-ups and immediately jump to a faulty conclusion!
I won’t detail these confusions, but the movie is pretty much divided equally between the confusions of the kids and the confusions of the adults, all of whom come to believe that their partners are up to some adulterous no good! If these adults hadn’t been cast properly – Fred Ward and Dee Wallace are among them, just to give you an idea – then these parts of the movie would have been a complete waste of time! So thank goodness for lively actors!
As for the young people sections of the picture, they’re more naturally successful because that’s where the movie’s heart lies, after all, and that is the crowd the picture-makers were presumably catering to! Here again, the performances help out! C. Thomas is okay I guess, with a few good moments here and there, and his gal-pal is really good, I thought! Mrs. Travolta is fine too, and doesn’t hesitate to disrobe when the narrative arc calls for it! C. Thomas’s gang of pals are okay as well, and one of them wears businessman clothes and carries around a briefcase, which I thought was a nice touch since I seem to recall a guy in my own high school who did the same thing!
My favourite scene in the picture, actually, involves all these pals – it’s in a treehouse or something, and they’re in there drinking beer and hanging out because they’ve just finished school for the year! Ha ha, always an exciting day! There’s nothing special about the scene – it’s where they discover the letter, blah blah blah – but it’s just a pleasant bit of hanging out, and I liked it! Ha ha!
The movie looks slick and professional, which isn’t always the case with this sort of picture, and it has a score by Jan Hammer, the guy who did the Miami Vice music! There are clever bits in the script, a few likeable characters (the ostensible “bad guys,” like the apeish boyfriend of Mrs. Travolta’s character, are given little empathy-inducing soliloquies) and a highly unlikely final scene! All this equals a reasonably enjoyable, if instantly forgettable picture! I give it two and a half tumbling grandfather clocks!
Posted by Burl at 22:38