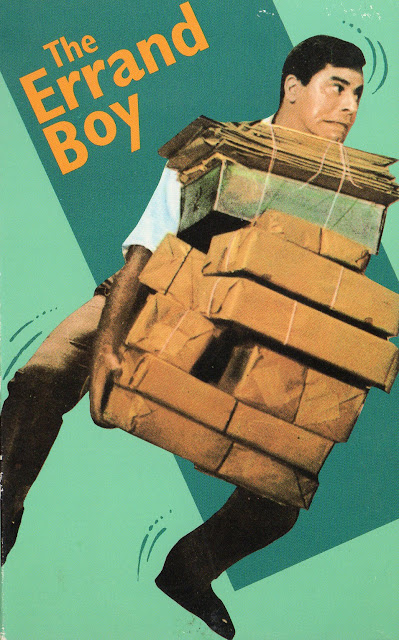 Hi, Burl stumbling at you from out of the darkness! Today I thought I’d review a comedy from that exciter of the French funnybone, Jerry Lewis! This one, The Errand Boy, has particular significance to me because it bears an uncanny resemblance to a script idea titled The Clapper-Loader which I myself had thought up almost twenty years ago! Of course, Jerry still gets the credit, but I swear to biscuits that I’d not seen The Errand Boy prior to thinking up The Clapper-Loader!
Like The Clapper-Loader, The Errand Boy is about a clumsy nebbish who comes to work at a Hollywood movie studio and causes chaos! Unlike The Clapper-Loader however, The Errand Boy lacks a compelling narrative and witty, sparkling dialogue to go with the physical comedy! But not every movie can be The Clapper-Loader, and in fact not even The Clapper-Loader can be The Clapper-Loader, since I have yet to even finish the script!
But let’s concentrate on The Errand Boy! Jerry plays Morty S. Tashman (so named in tribute to Frank Tashlin I’m sure), a hapless goof who gets recruited by the Paramutual Studios to find out where money is being wasted on the lot and then report back to the Paramutual executives! The executives are all named Paramutual – it’s a family business, and I guess this is a jab at the Brothers Warner – and are led by blustery Brian Donlevy in the role of T.P. Paramutual!
This is the plot, and the spy business is forgotten about as quickly as the film can manage it! It becomes a series of self-contained gag sequences set on the film lot and often pointing out the artifice involved in filmmaking, which perhaps was novel at the time! Morty’s base is the mail room, which is presided over by a master of the slow burn, Stanley Baker! His performance was great, ha ha, and the scene where he lays down the law to Morty and the rest of the peons has a classic climax involving Morty’s jump onto the desk!
The skits are pretty hit and miss! The best ones don’t end up as you assume they will, and often take a turn into surreality! The worst ones tend to rely on verbal rather than physical or metaphysical comedy, and aren’t much better than something you’d see on a third-rate variety show or cornpone Vaudeville circuit! The presence of the character Mr. Sneak, a man literally driven insane by his own sycophancy, is a warning sign that the scene will be a little less than stellar!
Of course, Morty himself is a bit frustrating! You wonder how someone so incompetent, so dimwitted, so blissfully un-self-aware, could even get dressed in the morning much less make his way down to the studio without getting killed! But that’s always the point with these Jerry Lewis guys, who aren’t really supposed to be human beings at all; until the inevitable sensitive ending in which Jerry tries to convince you, by the sudden appearance of strings on the soundtrack and the liberal spreading of saccharine, that indeed yes, contrary to all heretofore provided evidence, this clown prince of goofballs is meant to be someone with whom we the audience are meant to empathize and even identify! Ha ha!
Well, it never really worked with me! But that aside, as a joke delivery system The Errand Boy does pretty well, and if The Clapper-Loader never gets made Jerry’s picture will stand as a pretty fair replacement! I award it two and a half enormous jars of jellybeans!
Posted by Burl at 00:05