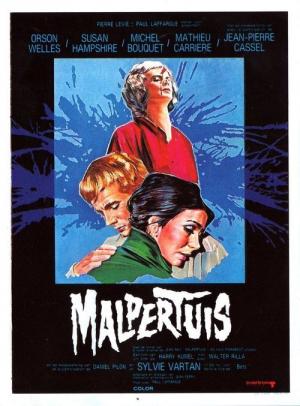 Well, it’s that time again! Time for ol’ Burl to grab the cinematic bull by the horns and wrestle it into the dirt – the dirt of critical evaluation! Ha ha, over my many years of movie watching, I’ve identified more than a few micro-genres, and built up a pretty extensive taxonomy! One category of movies I like is the Expensive Arty Horror Picture, which consists of uniquely oddball, almost experimental genre movies that break some new ground in the field! Matango is a good example, and so are movies like Horrors of Malformed Men or Lisa and the Devil or The House with the Laughing Windows or Zeder! I guess you might toss Videodrome in there as well!
Today’s movie is another picture in the great artsy horror tradition! It’s Malpertuis, which was adapted from a weird surrealistic horror book by the pseudonymous Belgian writer Jean Ray! Ha ha, the movie was made by Harry Kümel, who also made a movie about nude vampire ladies called Daughters of Darkness, and in fact has made several other pictures that you never hear about! Or maybe you do if you’re of the Benelux nations, but not so much outside of that particular socioeconomic region!
Malpertuis is also part of another micro-genre, the House Movie! These are pictures which take place mostly or entirely within the walls of a single house, and the house itself is more or less a character in the film! There are lots of haunted house movies in this micro-genre of course, like The Haunting, House, The Legend of Hell House, This House Possessed, The Evil and The Nesting, just to name a few, but there are also left-field weirdpics like Sunset Boulevard, Demon Seed and Guy Maddin’s Keyhole!
Well, I guess I ought to tell you a little about Malpertuis, but I’ll keep it sketchy, because it’s one of those movies you might prefer to go in knowing only a little bit about! It seems that a pretty-boy sailor-man is on shore leave and looking for the house in which he grew up! It seems to be missing! He chases his sister and ends up in a nightclub free-for-all where he gets bopped on the head! He wakes up in Malpertuis, the house of his uncle Cassavius, who is played without even getting out of bed by Orson Welles himself! The house is filled with all sorts of other people, mostly petit bourgeoisie or resentful servants or weird hangers-on, who all seem to be waiting around for the bedridden Cassavius to croak!
There’s a strange atmosphere in the house, and an odd reluctance or inability on the part of its denizens to leave! All sorts of things happen, including gruesome murders and illicit sexual acts, and later on some much, much stranger events and revelations, some of these involving the gods of ancient Greece! By the time the young sailor discovers the secret of Malpertuis and those who dwell within its mildewed walls, the movie has mustered up an otherworldly feeling that stays with you well after the credits have rolled and the last strains of the Georges Delerue score have faded!
Many of the movie’s pleasures are visual! It was shot by Gerry Fisher, a British cinematographer whose eclectic credits include lots of Joseph Losey and Tony Richardson pictures, a bunch of late-period John Frankenheimer and Michael Ritchie works, and crazy movies like Billy Wilder’s Fedora, William Peter Blatty’s The Ninth Configuration, John Huston’s Wise Blood, and of course Wolfen and Highlander! Truly an interesting career! And, in concert with the production designer and Kümel he does a great job with Malpertuis, giving the house enough varied life and colour and flaming gas lamps to make it an expansive and multifaceted environment with personality to spare!
This is a picture well worth seeking out! There are a few different versions, and I watched the 119 minute director’s cut, which is what I recommend to you! I give it three and a half swooping eagles!
Posted by Burl at 22:19