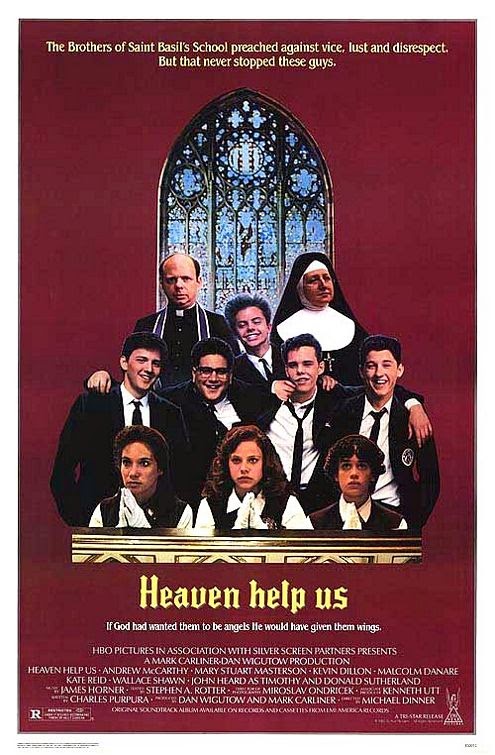 Hi, Burl here with a review of a comedy picture from days gone by – early 1985, to be precise! It’s called Heaven Help Us, and it’s sort of a little bit of the Porky’s ilk that was so popular at the time, but is also very much a coming of age drama and nostalgia piece, which, when you think about it, makes it a bit like Porky’s II also! It’s somewhat all over the place, actually, and possessed of what gets called an “uncertain tone;” but, for those of you who are wondering, it should be noted that no girls take off their shirts to show their boobs!

The story takes place in 1965 at a New York City Catholic school run by monks! The head monk is Donald Sutherland from The Puppet Masters, who comes off as a bit of a stick-in-the-mud, but loosens up by the end of the movie! Ha ha, I really liked the bit where he notes that his bread has been buttered – if you know what I mean!

Brother Donald’s employees include Brother John Heard, of C.H.U.D., as a cigarette-smoking monk; Brother Wallace Shawn, who doesn’t get very much to do in the movie; and a really vicious monk, named Constance for some reason and played by Jay Patterson from McBain, who likes to beat the students about the face and buttocks with a leather belt!

Of course the movie is more about the kids, and our main character is a regular-guy type, new to the school and played by Andrew McCarthy, who later that same year would star in that hated hucklebuck of a movie St. Elmo’s Fire! Then you get Matt Dillon’s brother Kevin, who would fight The Blob a few years on, as the tough guy, Rooney! There’s a chunky bigbrain named Caesar played by Malcolm Danare from Christine, a goggle-eyed milquetoast whose name I can’t recall, and a masturbation artist played by Stephen Geoffreys, whom we all know (and love!) from Fright Night!

As the year progresses, Andrew McCarthy falls in love with soda jerk Mary Stuart Masterson, who ol’ Burl had a big crush on all through the late 80s, a crush which only fully metastasized with the release of Some Kind of Wonderful in 1987! Here’s she’s pretty cute too, and she and McCarthy, I have to admit, make a pretty good couple as they walk along the beach and give each other hubcaps! Meanwhile there are shenanigans of all kinds in and around the school, including a decapitation – of a statue, ha ha!

It’s not a bad movie really, but ultimately, beneath the parade of mid-60s hits and the other period details, there’s not a whole lot to it! Some plot threads get dropped without ceremony, and sadistic Brother Constance goes a bit too far not just with his savage punishments, but with his hateful, twisted facial expressions! Ha ha, I don’t mean to sound cruel, but I can’t say I was surprised that this director, a young fellow named Michael Dinner, went on to make Off Beat and Hot to Trot!

In the end I have to give Heaven Help Us only one and a half brutal spankings, as the criminal underuse of Wallace Shawn is a sin for which there can be no true salvation!
Posted by Burl at 10:56