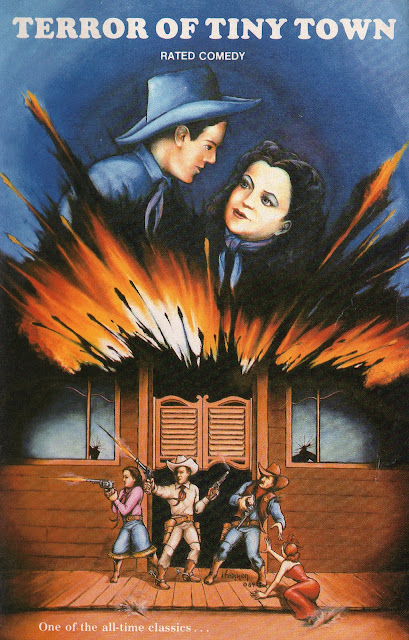 Hi, Burl here to review a very short movie! Ha ha, it runs barely more than an hour! I’m talking of course about Terror of Tiny Town, a Western made with an all-little people cast! As you can see from the poster, it is “rated comedy,” but in fact it’s a fairly straight-ahead Western action-drama!
Of course the movie is notorious in the exploitation field, more so even than the Werner Herzog movie Even Dwarves Started Small, in which I believe the cast was not only small-sized but hypnotized! But the movie doesn’t do much with the height-deficiencies of its actors, and in fact it’s easy to forget, or at least not fixate on, the shortness of the cowpokes and just get caught up in the wainscoting-high drama!
Ha ha, it seems that there’s a goodly amount of rustlin’ going on around Tiny Town, and two ranching families are each convinced the other is behind it! Buck Lawson, who wears a brilliantly white hat and a dust-repellant ice cream suit, is the good guy, and his dad owns the ranch; Nancy Preston is the young lady newcomer to town whose uncle Tex runs another big ranch! Well, that nasty Bat Haines is behind it all, rustling the cattle and setting the two families against one another!
Buck and Nancy carry on a Romeo/Juliet relationship for a while before Bat opts to raise the stakes by shooting Tex and pinning the crime on Buck! Ha ha! But of course everything eventually gets sorted with the help of a few well-placed sticks of dynamite!
Sure, there are a few midget gags in this movie, like the comedy relief cook who is terrorized by a cunning duck, and who walks in and out of his cupboards like they were closets! And there’s a fellow who guzzles down snifters of beer as big as his head! And the midget who sings basso profundo! (There’s a lot of singing in this movie – the whole town gets to warbling at the drop of a ten-gallon hat!) And, yes, one guy does walk into a saloon by trundling under the swinging doors! But the movie isn’t really a comedy unless you’re one of those people who simply point and laugh whenever you see a little person, and if so, ha ha, you’re a jerk!
The wee folks ride and shoot and fight just fine, though they’re not very good actors! A few of the action scenes are surprisingly exciting, and at one point a penguin shows up! On the whole, this is not much different than the typical Monogram-type Westerns of the period, and if you like those, you should enjoy this one too! And if the look of the film is familiar to you, it’s because it was shot by the same cinematographer as Cosmo Jones: Crime Smasher! Ha ha, I give Terror of Tiny Town two bricks and a short refrigerator!
Posted by Burl at 23:06