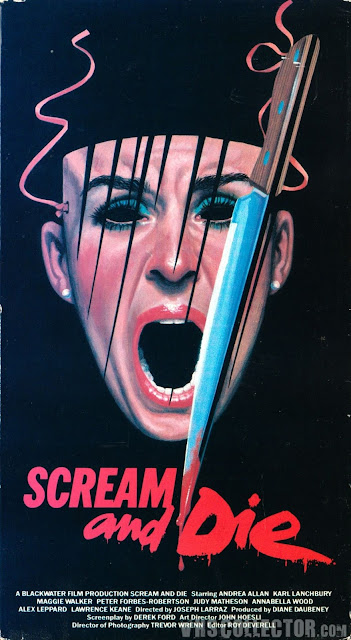 Hi, Burl here with a movie review for you! Ha ha, let’s have a little chat about British horror movies of the 1970s! There’s lots of good ones that I really enjoy, like Tower of Evil or Raw Meat or Theatre of Blood or The Wicker Man, and that’s not even counting the works of Pete Walker or Norman Warren, or the Tigon or Hammer films of the period! There was no shortage of marvelously entertaining spookshow pictures, but I have to say that Scream… and Die! is not one of them!
It was made by an Iberian director who directed a couple of his pictures in Merrie Olde England, including one from 1974 called Vampyres! Ha ha, I haven’t seen that one, but people tell me it’s pretty erotic! Having now seen this slightly earlier work, which is full of ladies wearing no clothes, I can certainly believe it! He really seems to enjoy filming ladies getting in and out of beds, judging from the number of times this occurs in Scream… and Die! Ha ha, I think there’s more of that sort of thing than there is of knife pokings or other scary stuff!
The story concerns a lantern-jawed fashion model of no especially great mental acuity, who looks a little like a cross between Gaylen Ross from Madman and lady singer Liz Phair, and who accompanies her shady, unpleasant boyfriend on a break-and-enter mission in the countryside! Ha ha, it’s a foggy night, and as dull-witted as our fashion model may be, she looks like Ludwig Van Wittgenstein next to this dim specimen! They blunder into the wrong house looking for who knows what, stumble across a pile of passports belonging to young foreign women, and happen to witness a brutal poking committed against a nude lady by an unseen gentleman in black gloves! Ha ha, it’s giallo time!
No, not jello time, ha ha, stop licking your lips, and there’s no pudding pops here! I’m talking giallo, those Italian movies about black-gloved killers which are a close and generally more stylish cousin to the slasher movie! The style spread beyond Italy of course, and this picture is one example of that, though it trades the sophisticated Milanese vibe typical of the Italian movies for a bleak and foggy Blighty grot!
Anyway, the fashion model gets away from the strange house, but her boyfriend does not, though it’s no great loss! She spends the rest of the picture fearful of the murderous mystery man, and trying to find the house where the murder happened so she can convince her friends that she’s hasn’t gone bats! Eventually the murderer proves to be exactly who we thought it was, but who we convinced ourselves it couldn’t be because that was too obvious! Ha ha!
There’s a scene in this picture that everybody talks about, and that’s the one where the mask-painting young fop makes sweet love to his middle-aged auntie! Ha ha, most of the reviews make it sound like the auntie is a withered old crone of a lady, but she’s actually quite attractive, and so the scene is not the wild, taboo-braking head-spinner that many of these namby-pambies make it out to be!
I’m usually a pretty patient fellow when it comes to movies – they don’t need to be all zip-boom-bang to entertain ol’ Burl! And while this one has a few spooky moments and little shreds of atmosphere here and there, it’s pretty muddled and boring most of the time! The pace is slow and the so-called mystery is uncompelling! It’s not a terrible movie or a complete waste of time, but it could use a little more vim and perhaps a dash of pep! I give Scream… and Die! one and a half mysterious bedroom monkeys!
Ha ha, a happy New Year to you all, and see you in 2012!