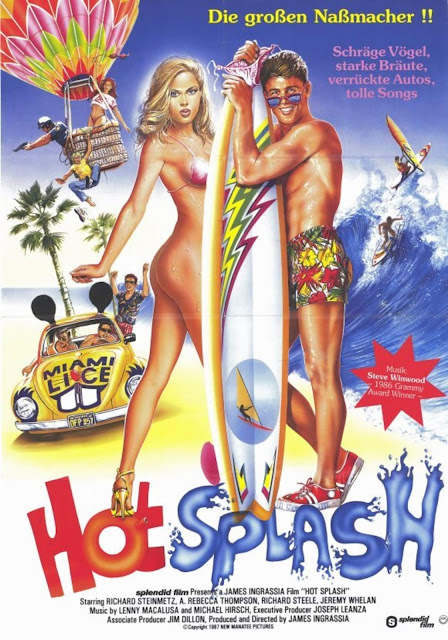 Ha ha, time to review a crazy teen sex comedy from the 1980s that I’ll bet you’ve never heard of! The picture’s called Hot Splash, which is on the face of things a kind of disgusting and nonsensical name for a movie, but is somehow completely appropriate for this one!
It was shot in Florida, a place I’ve never been; but from all I’ve heard about it, and from the other movies I’ve seen that were made there, this could practically be a documentary about life in the Dangleberry State! There’s a venerable cinematic history in Florida: why, just consider the films of Herschel Gordon Lewis! And the fine work of William Grefé, like Sting of Death and Death Curse of Tartu! The early works of Fred Olen Ray! And the Porky’s movies, along with other fine Bob Clark pictures! And Errol Morris’ Vernon, Florida! And Miami Vice! And Blue City! And the great killer capon picture Blood Freak! And any number of nudist camp films and fun-on-the-beach pictures like Spring Break! And of course The Artist Lewis Van Dercar!
Phew, that’s a lot of pictures! But it just goes to show what a marvelous cinematic history Hot Splash had to draw upon, should it have chosen to do so! But it didn’t! It does have a sort of an attempt at a plot involving surfers and their surfer chicks, but mostly it’s one of those non-movies like California Girls or something like that – just the stringiest of narratives clinging like stray hairs to goodtime documentary footage of young people having a grand old romp on or near the beach!
Well, it seems a big surfing competition is coming up, the Sundek Challenge! There’s a group of surfer buddies, like Woody and his jerk pal Jimbo and Jimbo’s incredibly ill-treated girlfriend Jennifer, and some other non-characters! Jimbo keeps playing around on Jennifer and stealing her money, and she says things like “You don’t understand, that’s what I like about Jimbo!” Ha ha, I hate to blame the victim, but that’s one young lady who ought to rethink her romantic devotion! Thankfully by the end of the picture she does, but only after the most unsexiest nude hot tub scene ever between her and the loathsome Jimbo!
Eventually Jimbo gets kidnapped by a slapheaded gangster named T.J., whose niece becomes a part of the surfer gang, and the race is on to rescue him in time for the big surfing competition! Ha ha, if I knew a guy like Jimbo and he got kidnapped, I’d have left well enough alone! But they go get him anyway for some reason, and he arrives at the beach in a big car shaped like a shoe! I liked that car, so I'll show you a picture of it!

The actual Sundek Challenge competition, which I guess is the climax of the picture, is conducted entirely out of long-distance shots of guys surfing tiny waves while a voiceover tells us that one or another of the competitors is doing better than the other! Ha ha, I don’t like to use sarcasm in my reviews, but in this case I’ll just say ooooohhh, how very very thrilling!
This movie is pretty bad! It was made by people who have no idea how to make a movie or tell a story, and I really hated the character of Jimbo more than I can express! Hot Splash is so stinky in fact that I have to fractionate my rating system further than ever and award this misbegotten cruickshank one quarter of an enormous inflatable bottle of suntan lotion!
Posted by Burl at 11:45