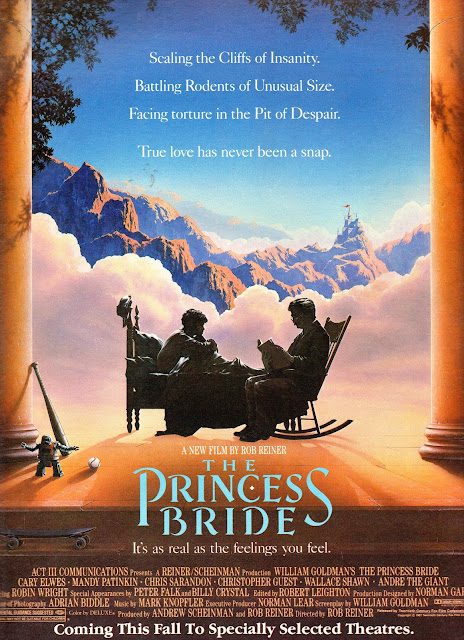 Ha ha, so we’ve come to a pretty pass, have we not my friends! Burl reviewing The Princess Bride! But why not? It’s a movie after all, and judging by the Santa on the wall in Fred Savage’s room, a Christmas one at that! And it was made in the 1980s too, which is an era I seem to keep revisiting in this blog!
I saw this one in the theatre, but, as I recall, only because it was playing at the movie theatre at the end of my street! Otherwise I probably would have ignored it in the way I ignored many of the other big 80s fantasy pictures, like Willow or The Golden Child or Labyrinth, none of which I’ve ever seen! I did see Ladyhawke though, which I seem to recall was pretty stanky!
I won’t bother relating the plot of The Princes Bride in much detail, ha ha! Pretty pretty princess, handsome suitor, quirky sidekicks and dastardly villains: that’s about it, and all framed by scenes with Peter Falk telling the story to his grandson Fred Savage! Everybody loves the bits with Wallace Shawn, Mandy Patinkin and André the Giant, and rightly so because those parts are great! André is very huge and loveable, and we get to hear Wallace Shawn, a long way from My Dinner With André – though he probably had dinner with André the Giant every day during the shoot – sputter the line “Do you want me to send you back where you were? Unemployed in Greenland???”
It’s all competently staged by Rob Reiner and nicely shot by the late Adrian Biddle, ha ha, but it’s never what you’d call a super thrillshow! Nor, for all its chatter about true love, does it ever pluck the heartstrings the way it intends; and this has been blamed in many reviews on the performances of Cary Elwes and Robin Wright in the lead roles! I guess there’s no denying that they're a bit deficient in the chemistry department – a supposedly history-making smooch between the two of them isn’t even shown in its entirety! – but I didn’t think their performances were bad! It’s just that they were comic performances more than anything, particularly in the case of Cary Elwes! I thought he was pretty good with his little comic bits, in fact!
The sword fighting scene between him and Mandy Patinkin is also very impressive! It’s well-choreographed and performed, and I’ll bet they had to practice it quite a bit before they got it right! It’s always nice to see the results of many hours’ effort on the screen! Still, they say Cary Elwes gave one of the worst performances ever committed to the screen in Saw (which I’ve never saw, ha ha), so maybe he was just a man born out of time – he should have been there fighting alongside Errol Flynn back in the olden days of pirate movies!
The picture takes on something of a variety-show aspect in the last third, as it parades out comic stars in heavy makeup or outlandish costumes for the delectation of the viewers! Of course we see Billy Crystal and Carol Kane in old-folks slather doing Catskills shtick, and Peter Cook doing a funny bit as the Impressive Clergyman! There are a few others in there too, and they’re okay, but don’t exactly keep us engaged in the picture!
I’ll give this enjoyable, often funny but slight fantasy picture two and a half six-fingered gloves, and an extra ha ha for conducting its business with such ruthless efficiency!
Posted by Burl at 10:49

Email ThisBlogThis!Share to TwitterShare to FacebookShare to Pinterest
Labels: 1980s, action, comedy, fantasy, romance, saw it on the big screen