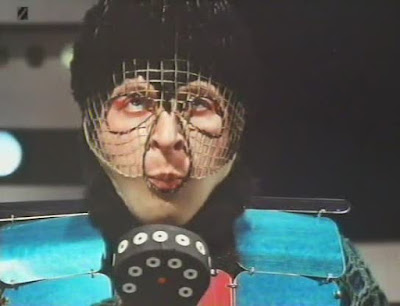 A belated Merry Christmas to you all from me, Burl! Here’s a review of a movie that’s supposed to be a Christmas picture, but it’s more of a completely berserk kids’ movie that just happens to take place around Christmas!
It takes place in small-town Quebec, and in that way is similar to another picture released the very same year, Mon Oncle Antoine! That one also centers around a youngster and takes place in small-town Quebec around Christmas, but in most other ways it couldn’t be more different than The Christmas Martian! But I think the two movies would make a pretty stellar double feature, quite frankly!
It seems there is a brother and sister whose Christmas vacation has just started, and their first stop on the way home from school is the store! While they’re in there bantering with the shopkeeper, a net-faced stranger in a long raccoon coat comes in, emits bubbles like he’s Robot Monster or something, makes some funny noises and then gobbles candy like it’s going out of style! The blustery shopkeeper chases him out, and from that time on, ha ha, the townsfolk know they’ve got a Martian problem!
While the kids go out looking for a Christmas tree to cut down, the strange incidents in the town multiply! One man sees an egg flying through the town at night, and the taxi driver has an encounter with an elderly flying lady clutching an umbrella like Mary Poppins! And then, after the siblings have found their tree, they spot the green footprints of the otherworldy intruder and follow him to his craft! They meet the oddball alien, whose name is Poo Flower, and he turns out to be pretty friendly! He feeds them candy from a vacuum tube and then shows them special pictures from his home planet!
Plot similarities to E.T. pile up as we learn that the Martian’s spacecraft is damaged and he’s stuck on Earth against his will! But a little welding fixes the problem, and after a flight around the world and some further antics with his brother and sister pals, Poo Flower’s only concern is escaping the skidoo posse of Francophones that has assembled to chase him out of their town and off the planet! He evades them by use of his Red Planet trickery, and then shows up at the kids’ house dressed as Santa Claus! There’s a confusion involving the children’s father, also dressed as Claus, and the police, and arrests are made and bitter recriminations uttered! But it all ends on a bittersweet but more or less happy note as the alien takes off to rejoin his own children back on Mars!
What an odd movie this is! Words can’t really express it fully, and certainly aren’t equal to the task of describing the peculiar aura exuded by Poo Flower himself! As stated, there isn’t much of a Christmas atmosphere to this picture, but the small-town Quebec vibe is thicker than mule paste, so that makes up for it! And there are a couple of Père Noëls there at the climax of the picture, so we have that! The snowmobile posse is pretty impressive too, I must say!
So for sheer craziness, a free-for-all attitude of improvisation, kooky happenings and the sheer fact that it exists at all, I give this peculiar holiday bauble an enthusiastic two and a half well-crafted prop UFOs!
Posted by Burl at 14:37