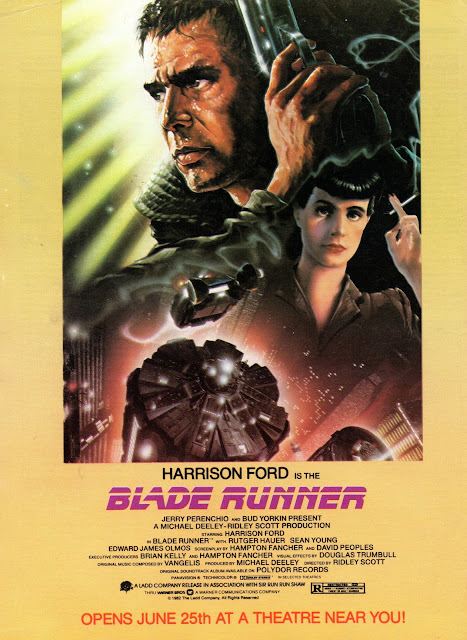 Hi, it’s Burl here with a review of a science-fiction classic! Ha ha, let me tell you a little story: when I was a young lad, I entered a filmmaking contest with a friend of mine! We made a little super-8 movie that was a sequel to The Birds, and our only competition was a group of older lads who’d made a sort of Jekyll and Hyde movie! There were at least five of these fellows, and they won the contest quite handily!
Well, first prize was two movie passes per entrant, and second prize was one movie pass apiece! As we were the second bananas, my friend and I got our envelope of movie passes first – and as we opened it up we realized there were ten passes in there! The first prize envelope had mistakenly been given to us! Believing that we deserved it anyway, we skedaddled! Ha ha! And then, with my ill-gotten five movie passes, I went to see Blade Runner five times in a row!
Maybe that’s a strange movie for a little kid to obsess over, but I was a strange kid I guess! Anyway, I watched the movie again just the other day to see how it stacked up now! But ha ha, I made sure to watch the director’s cut, just so there wasn’t any of that sad-sack narration which even as a youngster I had thought sounded phony and out-of-place! Aside from that and a sequence with a unicorn running around, and the disappearance of some countryside flying scenes at the end, I didn’t notice too many changes!
The story is pretty basic – it’s the future, and robots are so fantastic that you can hardly tell them from humans, until they want to grab something from a container of intemperate liquid! Then you know it! But they get pretty rowdy now and again, and special cops called Blade Runners are employed to keep these droids in line! Harrison Ford, well known from The Long Ride Home, is one of these officers, and his attitude towards contraptions has mellowed somewhat since his days as a space pirate in Star Wars!
Well, a bunch of robots go haywire and land on Earth, which is prohibited by law! No robots allowed on earth, say the signs! However, these droids just want to extend their life spans, which, thanks to the glasses nerd who invented them, is pretty stingy – only about four years! Rutger Hauer is the leader of these crazy robots, but, in a stunning twist, he might well prove to have more humanity in him than any of the so-called real people! Ha ha! Although he really does a number on that glasses nerd, it has to be said! Crick-crack-splort!
The future world they created for this movie is still stunningly realized and quite plausible! And the trick effects are still among the best ever created for a movie in ol’ Burl’s opinion! They go extremely well with the great Vangelis musical score! And I just like the look of these old school trick effects more than the fuzzy and fake digital effects they have these days! I know that makes me sound like a get-off-my-lawn curmudgeon, but that’s okay! It’s just how I feel!
I still like Blade Runner an awful lot! Not as much as I used to, maybe, because I can see now that there’s not much of a story to it, and having read the Phillip K. Dick book it was based on, I know how rich and kooky a picture it could have been! That’s neither here nor there though – it’s still a fine old classic of a motion picture, and I give it a solid three and a half Esper machines!
Posted by Burl at 12:44

Email ThisBlogThis!Share to TwitterShare to FacebookShare to Pinterest
Labels: 1980s, cop, saw it on the big screen, sci-fi