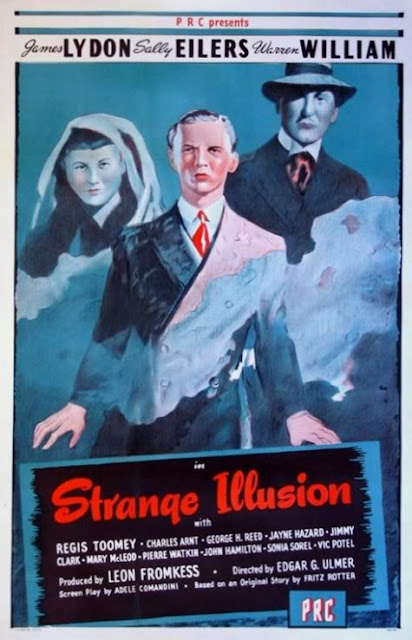 Hi, it’s Burl here to review another motion picture smash! I’ve always liked the movies of Edgar Ulmer – his amazing picture The Black Cat is one of my very favorite horror movies ever! And of course he made Detour and The Man From Planet X and plenty of other fine photoplays! He always puts lots of great little touches into his films that mark it clearly as the work of Edgar G. Ulmer and nobody else!
Strange Illusion, which was made the same year as the much more famous Detour, concerns a precocious young scion, Paul, returning from school to the family home only to find that his widowed mother is keeping company with an outwardly avuncular but clearly sinister smoothie by the name of Curtis! Curtis has everyone else pixilated with his city manners and greasy charm, but not Paul, who has been dreaming of this tiny-mustached pretender and is kept on high alert by prehumously mailed missives authored by his father from beyond the grave! Paul immediately suspects that this fellow and his friend Dr. Muleback might have had something to do with the death of Paul’s father!
Ha ha, does that sound familiar? That’s right, it’s the plot of Hamlet! It’s pretty great seeing Ulmer take on the Bard this way, with crazy dream sequences and a spectacular HO scale motoring accident, and all on a budget of about fifty cents too! And he’s got a great snarling chickenhawk of a bad guy in Warren William, who always did a good job in his oily-villain roles and in his spare time apparently designed and built one of the first ever RV camper vans!
The movie takes a strange turn when Paul decides that the best way to investigate and expose Curtis and Dr. Muleback is to get himself committed to Muleback’s nearby asylum! Turns out Curtis is a maniac patient of Muleback's with a taste for making love to young ladies and giving older ones a pretty stiff neck-twist! Doc Muleback’s only in it for the money though!
Well, this is a classic example of a movie that’s no darn good by any defensible standard, but that I really enjoyed anyway! Of course those Ulmer touches are manifestly great, and Warren William too, but I also liked other, less obvious aspects, like the performance of Jimmy Lydon, the fellow who plays Paul! Some might dismiss him as just another over-earnest jug-ear with a Boris Karloff lisp, but I thought he was right on the money! There's a great scene where Paul, on the phone with his girlfriend, baffles an eavesdropping Muleback by employing then-current teen vernacular! "Hey vixen, what's mixin'!" he cries! "Are you missin' my kissin'?"
On the other hand, the climax of the picture is extremely anti-climactic and rather dull! Too bad – I was hoping it would end with a car chase! But on the other hand we do get another fabulous dream sequence, so that sort of makes up for it! I give this little-loved but moody picture three easily-shattered two-way mirrors!
Posted by Burl at 18:01