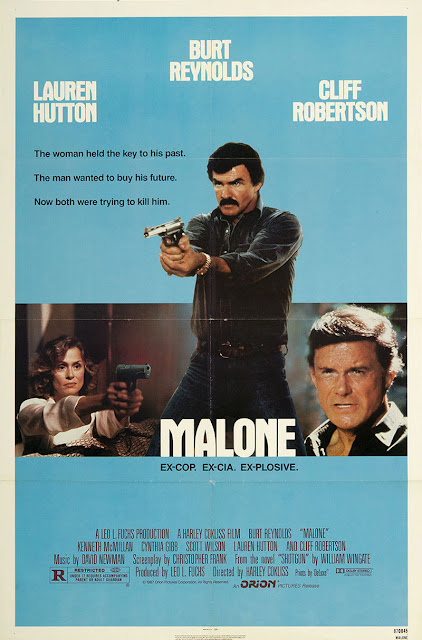 Hi, it’s Burl here with some action-drama for you! Ha ha, you know how Andy Warhol and Paul Morrissey have their famous trilogy of pictures, Flesh, Trash and Heat? Well, in the 1980s, the decade when anything could happen it seemed, Burt Reynolds also completed a similar trilogy of single-word-title movies, but his were called Stick, Malone and Heat; and I own all of these fine films on stunning VHS!
I’ll get to those others eventually, but Malone is the one I thought I’d review today! Ha ha, there weren’t a whole lot of 80s action movies with overtly right-wing bad guys, but this was one of them! Usually it was drug dealers, terrorists, mobsters or the gosh-darn Commies! I’d have liked to see a lot more of these Oliver North-esque heavies, because after all, the country was crawling with them back then, and I suppose it still is now!
In Malone, Cliff Robertson plays a fascist zealot millionaire with a plan to wear khaki pants, stand before a giant American flag and bellow nonsense, and thusly Take Back America; though you’d think a guy like that would have been reasonably happy with a brain-addled fellow traveler in the White House! Ha ha, with these Koch brothers we hear about, and others like them, that’s the sort of thing I suspect might be brewing up right now all through the U.S., so in a way Malone was ahead of its time!
Ex-CIA dirty-deedsman Burt Reynolds is driving his Mustang through the Pacific Northwest when he experiences car trouble! Luckily his car chooses to die in the very valley Cliff Robertson is trying to buy up as the staging ground for his coup! But there are still some stubborn families and businesses refusing to sell their land to this gun-happy wingnut, so it’s a good thing for them that Burt happens along to help them out! The usual scenes of escalating violence occur, and before you know it Burt is pumping out shotgun blasts before a wall of flame! Metaphorically anyway, because the photo assembly seen on the VHS cover never takes place in the movie precisely as it is thereon depicted!
Burt, sporting a real wallaby on his head this time around, takes a bullet at one point, and it looks pretty serious! It goes right into his abdomen and out the back, and then he falls down the stairs and soon after is involved in a pretty serious motor vehicle accident! But a few days of rest and some good loving from Lauren Hutton is all he needs for a full recovery, and soon enough he’s out vaulting fences and climbing barns like an uninjured man half his age! Needless to say he makes short work of all the über-conservatives, and that was pretty satisfying for ol’ Burl I must say! A giant explosion closes the film, just as it should!
Ha ha, it’s never very clear exactly what Cliff Robertson’s dastardly plan involves, and I chose to take this as a commentary on the juvenile and inchoate nature of all such “Take Back America” schemes rather than as simple lazy plotting! Burt, for his part, stands aloof from the politics in this role, but he sure won’t stand for petty would-be dictators throwing their weight around a community of generally decent people! In many ways the picture reminded me of Eye of the Tiger, even though I guess it’s trying to be more like Shane or one of Clint Eastwood’s Mysterious Violent Drifter movies!
Malone is strictly cookie-cutter nonsense in a TV movie style, but it’s pretty enjoyable in its own unambitious way; and having a non-Arabic bad guy with some ideological motivation beyond simple greed qualifies it as slightly novel! Ha ha, give this picture a look and pretty soon you’ll be shouting “Malone!” along with all the supporting characters in the movie! I give Malone two burning identification cards!
Posted by Burl at 10:40