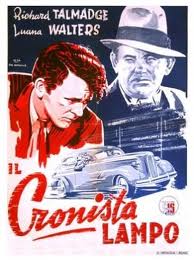 Hi, Burl here with another dusty, creaky old B movie for you! This one is called The Speed Reporter, and it tells the story of a reporter so devoted to getting his story that he’ll face any danger at top speed and engage in almost any gymnastics you can think of to get it!
I’ll tell you this right up front: I love a good newspaper movie! This picture comes from the golden age of them, the same general era that produced The Front Page and His Girl Friday and even Citizen Kane! And even a bad newspaper movie has the power to entertain a broadsheet-minded fellow like ol’ Burl, ha ha!
I guess The Speed Reporter would qualify as a bad movie, more or less! The star of the picture, Richard Talmadge, was originally a tumbler by profession, and the movie makes a lot of room to show off his athletic skills, of that there is no doubt! But he’s got a weedy voice, of the sort we hear from Neil Sedaka in Playgirl Killer if you remember that movie; and a decided inability to deliver the roguish charm with which his poorly-written lines are meant to be laden!
But Talmadge sure can jump around! In accordance with almost every other role he played in his career, his character here is named Dick, and he works at the city desk of a big-city newspaper! His designation as a speed reporter is unmentioned but nevertheless well-earned, for the instant he hears about a possible story, he’s jumping out a window and onto the top of a passing truck in hot pursuit!
The story in this case involves a morality squad set up to police the city’s gangsters, but the squad has been set up by the gangsters themselves, with a milquetoast puppet executive installed as the head of the organization! Somehow the gangsters figure this will allow them to operate with impunity, but they’re not counting on Dick’s speed reporting!
Ha ha, Talmadge does some pretty impressive stunts, and he’ll never leave a room by the door if there’s a window closer by! And the movie is filled with these crazy, flailing fistfights between the indomitable newshound and various thugs and nogoodniks! Ha ha, the speed reporter will throw wild roundhouses, then flip his opponents over desks and chairs! Eventually the bad guys are rounded up and the speed reporter gets his scoop and a special bonus from the crusty editor so he can marry his special gal!
As I mentioned, this is not an especially good movie, but it sure manages to entertain! I’ll give it two amazing futuristic phone booths and recommend you give it a look!
Posted by Burl at 16:16