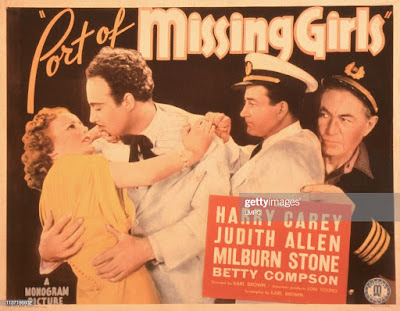 Hi, Burl here with another old curio of a motion picture for you! This one is called Port of Missing Girls, and it packs a fair bit of incident and action into its brief sixty-two minute running time! This is a classic bottom-half-of-the-bill movie, and sometimes that’s just what you want!
The story begins in New York, somewhere near some stock footage of Times Square, where, at a swingin’ club called Rossi’s, the featured attraction Miss Della Mason is about to warble a tune! But mob shenanigans are afoot, and a killer sneaks into Della’s dressing room and forces her to call in her boss, and then there’s a gundown! Well, poor innocent Della is implicated in the setup, and following an olde-tyme car chase, she has to jump a freighter for parts unknown!
On the face of things she’s picked the worst ship possible to stow away on, because the ferocious captain of the vessel is none other than notorious woman-hater Josiah Storm, known to have despised ladies ever since his wife packed up their baby and left him for another man lo these twenty years! But he’s played by the great Harry Carey, and so you know he’s just an old softie underneath! The steamer makes its way to the South Seas, and, as Della and radio operator Jim fall slowly in love, the captain decides to drop her off at the Port of Missing Girls, an island or peninsular or at least isthmic community which might be Hong Kong or might be Macao or might be some totally invented place, but in any case is where the fugitive girls of the world have gathered to entertain grumpy tourists!
The house mother of this strange nightclub is Minnie, and I do have to admit, with my twenty-first century cynicism, that the place seemed more like a House of Ill Repute than it did a nightclub, and Minnie its Madam! Be that as it may, it also makes Port of Missing Girls a part of that subgenre I love so well, the International Gathering Place of Fugitive Expatriates genre! Lots of great movies touch on that, from Casablanca to The Wages of Fear to Naked Lunch, and even a hucklebuck like Soldier of Fortune uses this trope to a degree, and whatever the movie it’s always welcome as far as ol’ Burl is concerned! An extra bonus in this picture is an appearance from the sassy and gorgeous Betty Compson from The Docks of New York, who plays another missing girl named simply Chicago!
Some vague intrigue involving a white Chinese general and a dastardly Frenchman is whipped up while the ship is in port, and Della risks her newfound freedom to save Captain Storm, Jim and the rest of the boys from a legion of coolies in rice picking hats! Ha ha, the climax of the picture is an enormous popgun battle on the deck of the ship, with the screen almost completely obscured by great drifts of revolver smoke!
It’s an entertaining little movie, though it has all the strange quirks of its time! The Chinese are of course jabbering hordes, and the ship’s cook, Misery, is played as a fearful, foot-shuffling idiot by a low-rent Mantan Moreland pretender named Snowflake! He does get a few good moments in the climactic battle, hiding in a funnel and bopping coolies on the head with his frying pan! Ha ha, racial sensitivity, thy name is emphatically not Port of Missing Girls!
Otherwise it was an enjoyable little daffodil, and although it might have tried harder with the exotic South Seas atmosphere, I give it two and a half cables from Washington!
Posted by Burl at 12:47