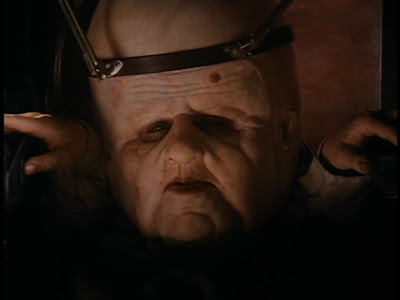 Ha ha, Burl here to review one of those crazy oddities from the mind of Charles Band! He’s the guy who’s obsessed with tiny little toy monsters and miniature killer dolls and such curiosities as that! Ha ha, he made Puppet Master and Demonic Toys and Dollman, and of course Dollman Meets Puppet Master Vs. Demonic Toys!
Of course he also made Metalstorm: The Destruction of Jared-Syn, which I’ll have to review here someday; and his father Albert made I Bury the Living and his brother Richard wrote the music for, among others, Re-Animator, so he’s part of a real filmmaking dynasty!
And who knows, Head of the Family may be his attempt to dramatize this saga in some way! We non-Bands can never know! Anyway, Head of the Family isn’t about killer puppets or dolls with knives, but about a strange family “headed,” ha ha, by a guy with a little tiny body and a big enormous melon! They’re the Stackpool family apparently, and the big head guy is Myron, who controls his three siblings with his mind! One of them is a guy with bulgy eyes and sharp ears, another is a pretty lady and the third is Otis, an oafish strongman!
Mixed up in all this is a neo-noir plotline involving Lance, a guy who owns a store-slash-diner, who’s in love with Loretta, the nubile wife of Howard, the local tough-guy biker! Every chance they get, they sneak off to make sweet love! One night Lance happens to notice the Stackpool family up to some nefarious deeds – turns out they kidnap people for use in Myron’s brain operations, and the Stackpool manse has a whole bunch of brain-vegetables running around the basement! So naturally a little blackmail is in order to force the Stackpools to get rid of the biker!
But the two lovers soon fall into the clutches of the giant head and his family, and the whole thing climaxes with a performance of, I presume, George Bernard Shaw’s Saint Joan, with the soldiers and cardinals enacted by the brain operation victims and Loretta in the role of the about-to-be-roasted Joan! Of course, matters are complicated further by the tiny shred of autonomy Otis has left, which refuses to see such an outrage done to a pretty lady! A housefire is the inevitable conclusion!
It’s a weird little movie, I’ll say that much! I like weird movies, so that’s a good thing as far as I’m concerned – the best thing about the picture, in fact! The acting is surprisingly solid all around, and the special effects of the giant casaba man are sometimes pretty good – they use forced perspective and such Mélies-era tricks as that! I always like to see that stuff!
On the other hand, there’s not much to the movie, and it’s a talky one, greatly deficient in action! The story could use a few extra wrinkles too, and the characters some depth! There are quite a few scenes of sexual congress between Lance and Loretta, and she’s completely bum-naked when she plays the part of Joan of Arc at the end, but somehow this doesn’t liven up the movie to the degree that you’d expect! Ha ha! The weirdness, however, just about almost carries the day!
Because it tries something different and does pull off a few small coups, and because it’s slightly funny or clever in parts, and because there’s an oaf wearing a jerkin and a guy with bug eyes, I’ll award this strange curio two pork tenderloin tongues!
Posted by Burl at 15:12