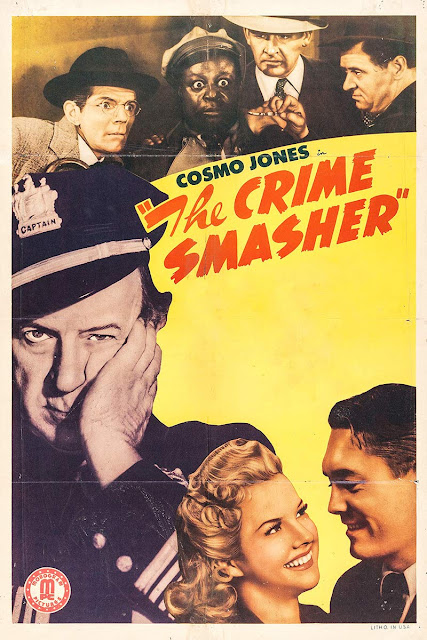 Hi, ha ha, hi, it’s Burl! I wanted to tell you about a movie I saw that was evidently based on a radio serial that must have been popular in the early 40s or so! I think this is the only movie they made from the series, but I think maybe it’s the only one that needed to be made!
It’s called Cosmo Jones, Crime Smasher, and it starts out in a nameless town with two rival gangs creating crime havoc for each other and everyone else, sort of like in Miller’s Crossing! The newspapers declare a crime wave and proceed to have a field day, just as they always like to do in these pictures! Ha ha, when I was in school, field day was just us running around doing sports and collecting little ribbons! Mine usually said “Participant” on them, which I assume is good!
Anyway, the chief of police is none other than the master of the slow burn, Edgar Kennedy! You know the slow burn: somebody does something exasperating, and a high blood pressure individual like Chief Edgar widens his eyes and rubs his hand across his face, sighs deeply and shakes his head in disbelief, and even though it’s in black and white you can tell he’s turning red as a tomato! Then, when you know the rage has boiled up into a white-hot frenzy, he blows his top! Ha ha, that’s the slow burn!
Chief Edgar’s best lieutenant is Pat, and Pat's girlfriend is the mayor’s secretary! There’s a lot of political pressure on the cops to stop the crime wave, and that’s when we finally get the titular detective, Cosmo Jones, who turns out to be a glasses nerd who has taken detective courses by correspondence! He seems hapless and ineffectual, but when a flirtatious party girl is kidnapped, he’s clever enough to help the newly-demoted Flatfoot Pat and Chief Edgar solve the crime!
But of course even Cosmo Jones, Crime Smasher would be helpless without his sidekick and good pal Eustace, played by Mantan Moreland! Of course, Mantan does the sort of shtick that is not very well received in this day and age (I think the last time we saw it is probably in Mausoleum!), but it’s pretty fascinating to watch! He does the “feets don’t fail me now” routine a couple of times, I think! He was a talented guy, and to a degree manages to use that talent to override or subvert the demeaning caricature he plays!
I guess the best way to approach this picture is as a crazy curio of yesteryear! It doesn’t really hold its own as a movie, though I will say that it mostly manages to keep the comedy and the crime drama fairly well segregated! Ha ha, and the cast, from Kennedy to Moreland to Frank Graham, the radio personality who plays Cosmo, to the rest of them, are at least competent and in some cases really good! And it also makes me wonder why nobody names their kids Cosmo any more! Ha ha, I’ll give this loony daffodil one and a half angry calls from the mayor!
Posted by Burl at 17:23