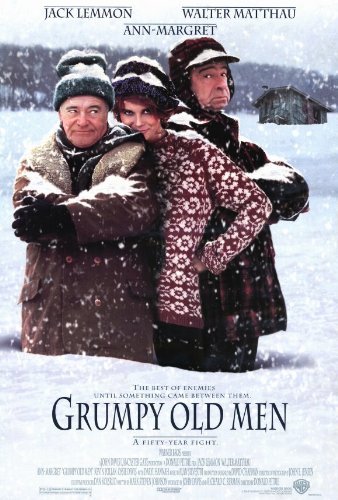 Ha ha, hello mo-rons, it’s Burl! Sorry to call you “mo-rons” – I didn’t mean it at all! That’s just how the old ducks in this movie address one another, and I guess it’s a little catching!
The movie of course is the legendary Grumpy Old Men, a gutbuster of a picture released way back in the early 1990s, when the greatest stars in the Hollywood firmament still walked the earth as men! Of course I’m talking about Jack Lemmon and Walter Matthau, and in fine supporting roles, Burgess Meredith as Grandpa and Ossie Davis as Chuck the bait shop proprietor! These excellent players have all gone to the great Slippery's in the sky, but for one glorious 104 minute thunderclap of a motion picture, they could all be observed walking more or less erect and dropping profane bon mots left and right in the snowscapes of northern Minnesota!
It seems that John Gustafson and Max Goldman are next-door neighbours in the little town of Wabasha, and because of events from many years ago involving a lady they both liked, they hate each other with a passion! Ha ha, good morning putz! Hello moron! But they have mutual interests, like ice fishing and their pal Chuck, and discussing their old man ailments, and soon their common passions clash once again when Ann-Margaret moves into the old Klickner place across the street!
Why does she move into the old Klickner place, you are almost certainly wondering! Ha ha, it seems that Ann-Margaret’s mother was a shopgirl in old man Klickner’s department store, and also was his secret mistress! Well, when a little baby was conceived, her mother had to leave Wabasha to avoid the scandal! But old man Klickner never forgot his illegitimate daughter, and eventually willed his house to her! And that’s the tale!
Well, most of the movie concerns the battle for Ann-Margaret’s affections between Max and John, and also the growing affection between Max’s son and John’s daughter! I have to admit that on my initial viewing, after Ann-Margaret takes up briefly with Chuck and then Chuck subsequently kicks the bucket, I thought the movie was going to be a black widow thriller! But no, it's just a simple, perfect comedy with some masterful pathos mixed in! Of course, Grandpa Gustafson pops up regularly to deliver unforgettable comments on the goings-on, as well as the sort of advice only a 107 year-old man can provide! And of course there are several scenes in Slippery’s bar, the greatest bar ever portrayed on film! The climax takes place on Christmas Eve, and later, when everyone has recovered, we witness the final humiliation of Snyder, the evil revenue man!
What a terrific picture! It just makes you cozy and comfortable to watch it or even to think about it! Ha ha, I don’t know how many times I’ve seen this tremendous movie, but it just keeps getting better every time! The laughs start in the opening moments when the snowy shots of Minnesota are juxtaposed with Irving Berlin’s “Heat Wave,” and they just never let up!
The marvelous success of this picture when it was released on Christmas Day of 1993 led to several subsequent old man pictures with Matthau and Lemmon, including Out to Sea, The Odd Couple II and of course the sequel to this one, Grumpier Old Men, which I’ll be reviewing here soon! But none of them quite measured up to this picture, I’m sad to say! But on the other hand, how could they? Ha ha, I give this major motion picture four skinboats to Tuna Town and recommend you make enjoying it an annual experience from now to perdition!
Posted by Burl at 14:25