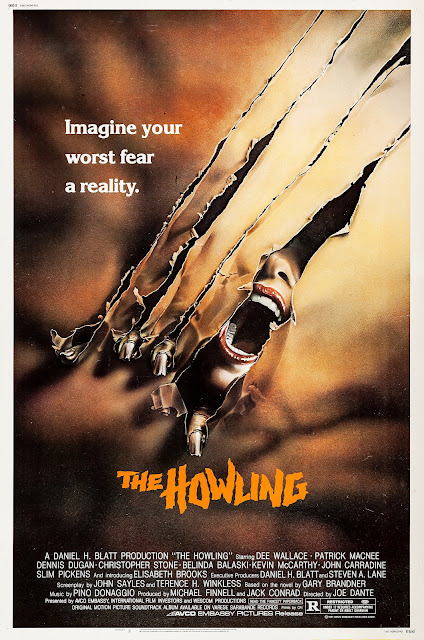 Ah-roo and graw-graw, it’s Burl, here to walk on two legs with a movie I’m surprised I haven’t already reviewed! Yes, it’s a werewolf picture – you’ve already guessed that, I’m sure, from my introductory noises – and it stars the finest of actors, Dick Miller, and it’s a key film of my youth! Ha ha, my pals and I just loved it, along with An American Werewolf in London, which is sort of its compadre and rival in the werewolf world! It was one of the gems of 1981, which was designated by Cinefantastique magazine as the Year of the Wolf! Of course, in my usual long-winded way, I’m talking about Joe Dante’s fine picture The Howling!

And as noted it’s a werewolf picture, but it starts out like a crime show, with TV newslady Karen White, played by the ever fragile-seeming Dee Wallace from Secret Admirer, hot on the trail of the notorious Smiley Face Killer, who's known for leaving a smiley face sticker at the scene of each brutal slaughter! But when Karen comes face to face with the maniac in a dark and scary pornoo booth, something so oddball happens that she’s traumatized! The cops shoot the killer dead, but Karen can hardly remember the weird thing she witnessed! Her husband, played by Christopher Stone from The Annihilators, her station manager, in the person of Dennis Dugan from Smile, and her best friend, Belinda Balaski from Cannonball, are all sympathetic, but nobody can stop her nightmares or recover her memory!

Patrick Macnee from Sweet Sixteen plays the sort of pop therapist whose field of study happens to be exactly what the movie’s about, and his advice to Karen is to get out of it for a while and go up to his therapeutic compound on the coast! This woodsy and rustic place proves to be, among other things, a hotbed of great character actors like John Carradine from The Boogey Man, Slim Pickens from Pat Garrett and Billy the Kid, and Noble Willingham from City Slickers! Of course I don’t think I’m giving away a confidence by telling you that in addition to providing a satirical look at the sort of self-actualization pocus that the 70s was known for, the therapeutic compound is also a breeding ground for werewolves, and so things get pretty hairy for Karen!

But meanwhile her friends Dugan and Belaski are doing some investigating back in the city, and they find that the Smiley Face Killer, played here by Robert Picardo from Explorers, has turned up missing even though he was dead, and that’s because he’s a werewolf of course! Some silver bullets are provided by none other than Dick Miller, and then the stage is set for a battle of fang and tooth! It does take a little long to get there by modern standards – ha ha, there are long werewolf-free passages in the first two thirds of the picture, and a surprising dearth of ah-roo overall – but the journey is one of absolute enjoyment! The Pino Donaggio score is a big help, and the script is a gangbuster!

And oh frankenstein, what a supporting cast! In addition to the many champs already named we get veterans like Kevin McCarthy from Invasion of the Body Snatchers in the role of the grumpy owner of Karen’s TV station, Ken Tobey from It Came From Beneath the Sea as a cop, and best of all the fabulous Miller from A Bucket of Blood, here again playing Walter Paisley, this time in the guise of the mercenary occult bookstore owner who calls werewolves “worse than cock-a-roaches!” Ha ha! We also get cameos from Roger Corman and Forrest Ackerman and screenwriter John Sayles, who also turned up in Dante’s Matinee!

Of course there were many sequels to this picture, beginning with Howling II: Your Sister is a Werewolf, then moving on to the one with the were-marsupials, and only getting worse from there! Ha ha, I’ve seen a few of them, but all I recall is that they were stank! This one is the real deal, though – a terrific follow-up to Dante’s previous picture Piranha! My friends and I watched it plenty back in the old VHS days, and I can tell you it holds up! The standing-up werewolves look cool and the transformation trick effects are tasty! There’s even a touch of stop motion, as you'll find in most Dante pictures! Yes, it’s a solid entertainment, very hairy, and so I give The Howling three and a half frying hamburgers!