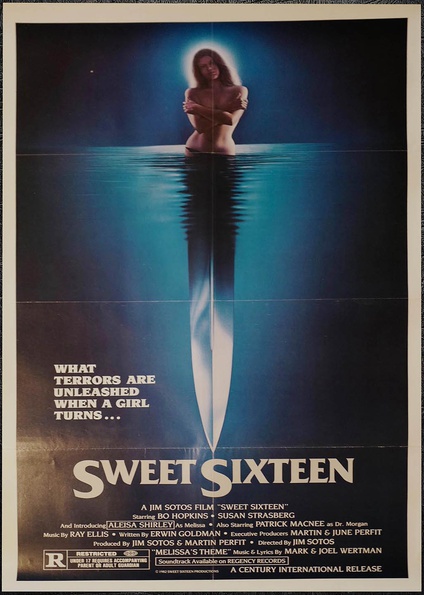 With a small town desert hello, it’s Burl, all revved up and ready to review a mystery slasher for you! Of course the movie is Sweet Sixteen, and although it is indeed a mystery and contains what it reckons to be a twist ending, the biggest surprise this picture has to offer is that it wasn’t directed by Howard Avedis or shot by Gary Graver! Ha ha! Hard to believe, I know, but it’s true!

As it turns out, Gary Graver shot some additional material for it, so it’s not as bereft of his touch as I had imagined! And the confusion in any case comes more from my own mind than anywhere else, because after all, the video box for this one and for Mortuary are similar enough as to intermingle in the mind when not directly confronted with them! That easy confusion is part of the the Vestron touch, I suppose - ha ha, that, and their lousy non-stick label glue!

But I digress, more than usual even! Sweet Sixteen is a mystery slasher set in Texas (but shot in California), and, though it never really commits to the “holiday/event slasher” bit, the script lazily attempts to connect a series of local murders with the impending sixteenth birthday of new-girl-in-town Melissa, played by Aleisa Shirley from Spacehunter: Adventures in the Forbidden Zone! Melissa is the subject of some nude scenes and no shortage of leering underwear shots, so it’s a good thing the actress looks well past the age she’s supposed to be, ha ha! It’s creepy enough as it is, and if the filmmakers wrestled at all with the need, per the film’s title, to make Melissa so young, against the desire to provide the genre’s requisite cheesecake, they evidently knuckled under completely to the latter obligation!

Bo Hopkins from Tentacles and Mutant plays the local sheriff on the case, and his kids, Marci and Hank, played by Dana Kimmell from Friday the 13th part 3 and Steve Antin from The Last American Virgin, are on the case too, especially Marci, who fancies herself a sleuth! In the end she doesn’t do much sleuthing though, other than blundering across the dead bodies left behind by the killer! Meanwhile, Patrick Macnee from A View to a Kill and Susan Strasberg from The Manitou play Melissa’s parents, and Don Stroud from Explosion and Django Unchained is a local racist with a grudge against the Indigenous peoples of the area!

As you can see, it has a pretty impressive cast, and the familiar faces continue right into the margins! Michael Pataki from Graduation Day is a local grandee; Larry Storch from Without Warning is a bartender; Glenn Withrow from Armed and Dangerous is in there as a something or other; and Henry Wilcoxon from Caddyshack plays old man Greyfeather, because what movie like this would be complete without a little touch of offensive redface!

The idea is that any strapping young country lad who shows too strong an interest in Melissa is destined for a dicing, and the consequence of this criterion is that most of the victims are male, which is a refreshing change (though not as rare a thing as is often claimed; ultimately the victim gender ratio in 80s slasher pictures is about equal); but on the other hand tends to reduce the list of probable suspects to nearly a singularity! Ha ha!

There’s a terrific B cast, even if some of them aren’t trying very hard, and the lighting is not entirely awful, but there’s not a lot else to recommend this picture! The script is, I’m sorry to say, unremittingly terrible, the pokings numbingly infrequent, the “mystery” eminently solvable even to a viewer like ol’ Burl, and the Special Makeup Effects virtually non-existent! Also, there's a syrup-laden theme song that will have you rubbing at your ears like Curly Howard! Still, with that cast it remains watchable, and so I give Sweet Sixteen one and a half latherings!