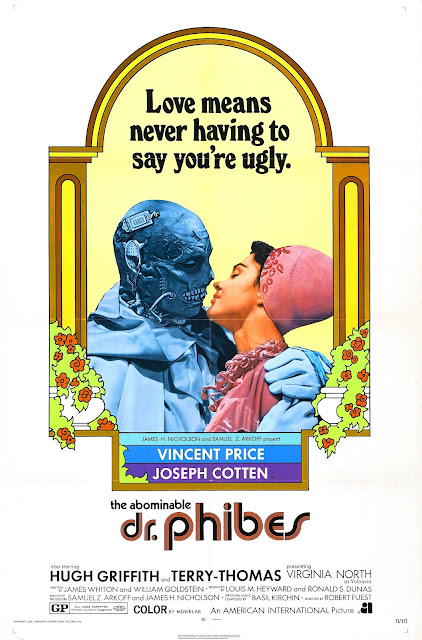 At the playing of the organ, it’s Burl, here to review a popular curiosity of the Seventies! It’s a little of Vincent Price’s wonderful egg magic, and he speaks here without moving his mouth just as when he narrated The Devil’s Triangle! Of course we also know Price from his later roles, such as we find in Dead Heat and Edward Scissorhands, and we know him from his work on the AIP Poe films, and from yet earlier works like Laura and The Baron of Arizona! But this is a taste of his early-70s stuff, and of course it could only be The Abominable Dr. Phibes!

I saw plenty of stills from this movie before ever seeing the movie itself, because it had come out not long before a rush of picture-book histories of horror movies were published, and they all used images from it and its sequel, Dr. Phibes Rises Again! And why not? They’re well-shot movies with elaborate and unusual sets and plenty of crazy and bloody goings-on to depict, and if the truth be told, the visual delights with which the picture is well salted, along with of course the outré murders and limited but still delightful Price performance, count as the movie’s main virtues!

It’s a revenge story, even if the motive doesn’t make much sense! As the narrative commences the murders have already begun, and in fact we join a crime in progress as a man in bed is shredded by bats loosed into his bedroom! Ha ha, it seems that we’re located in London in the year 1925, and general purpose genius Dr. Anton Phibes, with the help of his beautiful but mute and mysterious assistant Vulnavia, is taking out the entire surgical team he holds responsible for his wife’s death on the operating table, one by one, with killings inspired by curses in the Old Testament!

On his trail are the dogsbodies of Scotland Yard, represented by a blockheaded policeman named Trout, played by Peter Jeffrey from The Adventures of Baron Munchausen! Ha ha, Trout makes a few leaps of logic that initially give him the appearance of someone with a decent investigative mind, but he’s soon revealed as an incompetent who seems smart only in comparison with his even dimmer superiors! Joseph Cotton from Shadow of a Doubt plays Dr. Vesalius, the leader of the rapidly dwindling surgical team and the obvious final victim, and even he fails to see certain highly evident aspects of the revenge plot coming! And their dimwittedness even reduces the purported genius of Phibes, because we think that after all it wouldn’t take much cleverness to trick this gang of muleheads!

Of course it’s the goofy and horrible murders which stand as the film’s main attractions! We get the bat attack, a headsqueeze from a trick frog mask, an exsanguination (neatly bottled as in Exorcist III), rats on a plane, a freezing by snow machine, a highly unlikely brass unicorn impalement, a munching by locusts, and an attempted acid facewash! This is not strictly speaking Old Testament stuff, but we won’t mind that, ha ha! And of course Price is always a treat, but I find his charms muted here since he doesn’t speak in the accepted oral manner, and when we do hear his voice, the Priciness of it is altered by his stilted and mechanical syntax!

There are plenty of baffling questions, like why Vulnavia, played by Virginia North from On Her Majesty’s Secret Service, is so devoted to Phibes and his plot! Is she even human, or is she one of the clockwork creations Phibes has playing music in his lair? (Vulnavia is always playing music too, so maybe that’s the giveaway!) And why does Phibes blame the surgeons so thoroughly for his wife’s death? Being so completely unaware of the risks of any surgery in the 1920s makes him come off as something of a reactive idiot! And why was a psychiatrist (the frog mask victim) part of the team at all? Just for the “headshrinker” joke I suppose, but that hardly seems worth it!

Anyway, the movie quite actively resists any attempt to take it seriously, and as mentioned, it has a number of pleasures you can concentrate on instead! It’s never scary, but it is comic-gruesome, and of course, ha ha, the Price is right! I’m going to give The Abominable Dr. Phibes two brussels sprouts!